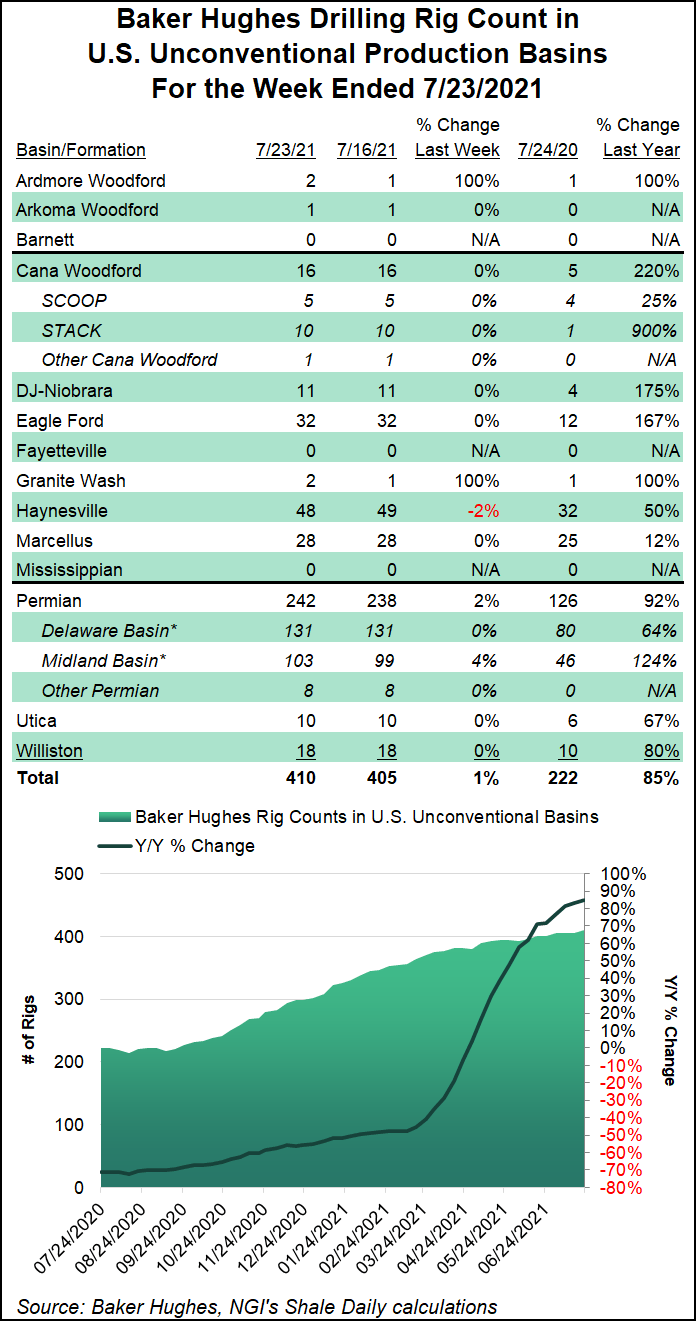 All of the net gains domestically for the week occurred in the oil patch, with natural gas-directed rigs holding flat at 104. The 491 active U.S. rigs as of Friday compares with 251 rigs in the year-ago period, according to the BKR figures, which are based partly on data from Enverus.

Land drilling increased by seven rigs week/week, with the Gulf of Mexico count unchanged at 17. Horizontal rigs increased by five overall, with one directional rig and one vertical unit also added during the period.

The Canadian rig count eased one unit lower overall, falling to 149, with oil-directed drilling accounting for the net decline. Canada still finished the week more than 100 units ahead of the 49 rigs running there a year ago.

Broken down by major play, the Permian posted a net increase of four rigs week/week, raising its total to 242, versus 126 in the year-earlier period. Also among plays, the Ardmore Woodford and Granite Wash each added a rig, while the Haynesville Shale dropped one unit from its tally.

Broken down by state, Texas saw its tally jump six units higher to 228, up from 103 at this time a year ago. Utah added two rigs overall for the period, while Oklahoma added one. On the other side of the ledger, Louisiana saw a net decline of two rigs week/week, lowering its count to 52, versus 30 in the year-ago period, the BKR data show.

The 2Q2021 earnings season is underway for the oil and gas industry, and oilfield services provider Halliburton Co. helped kick things off by reporting a 12% sequential increase in revenue for its North America business.

Looking longer term, Miller said the company sees itself “in the early innings of a multi-year upcycle. For the first time in seven years, we anticipate simultaneous growth in international and North America markets.”