The prolific Permian Basin, the mature super basin that extends from West Texas into southeastern New Mexico, should reach an oil production record this year of 815 million bbl-plus, far exceeding the previous peak of 790 million bbl set in 1973, according to IHS Markit. 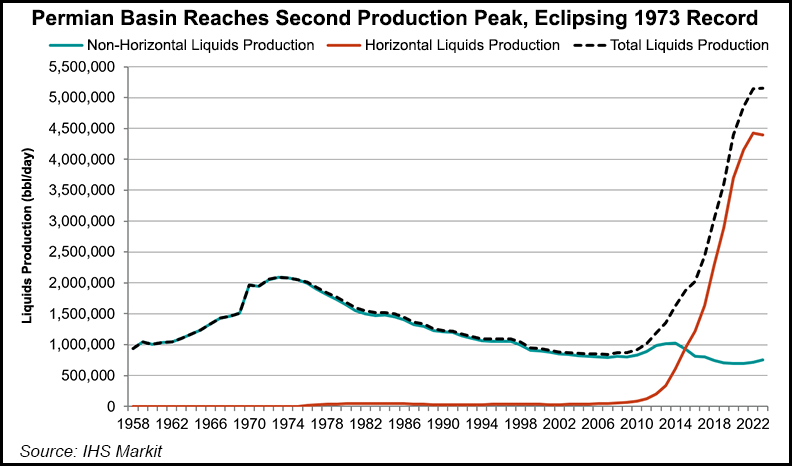 This year’s expected production milestone didn’t crawl past the 1973 peak but instead should eclipse the 44-year-old record by more than 25 million bbl.

“The magnitude of the rebound in Permian Basin liquids production is unprecedented,” said IHS Markit’s Reed Olmstead, who directs energy research and analysis. “Not so long ago, many in the industry were saying the Permian was dead, but the Phoenix has again risen from the ashes and is soaring to new heights.

“The Permian Basin is on track to add more than 2 million b/d in new production since 2007, and after the final-year production count is in for 2017, we will see the previous all-time liquids-production peak of 2.16 million b/d during 1973 surpassed by a significant margin, with total Permian volumes at roughly 2.75 million b/d.”

By mid-year 2017, average monthly production already had exceeded the best month of Permian production during the former peak year of 1973.

Year-to-date through this past July, Permian liquids production exceeded 484 million bbl, or an average of slightly more than 69 million bbl/month.

Besides the overall exploration and production (E&P) activity and related investment significant to the region and operators in the basin, “the implications for U.S. energy security are significant, since we have become in a relatively short period of time more self-sufficient in terms of energy supply and are less reliant on imports,” Olmstead said.

Longer-term implications for Permian oil supplies are evolving, and the future looks promising, according to the firm’s energy researchers, who have completed the first, three-year phase of “The Permian Basin Interpreted in 3D: The IHS Markit Permian Basin Unconventionals Kingdom Geology Project.”

The research models and interprets the basin’s key geologic characteristics to help estimate remaining hydrocarbon potential. Initial results indicate the Permian still holds an estimated 60-70 billion bbl of technically recoverable resources, about twice as much as the cumulative oil production to date.

Since it first began producing in the 1920s from the famed Santa Rita No. 1 well, the Permian cumulatively has produced more than 39 billion bbl of oil reaching peak volumes in 1973. Conventional oil production declined steadily in the next three decades, and some industry observers thought the Permian’s best days were behind it.

However, unconventional drilling and completion technology changed the game in the 2000s, making it possible to extract oil and gas from tight and shale resources that had been considered uneconomic to produce.

“The Permian is one of the most prolific basins in the history of oil production, with the onset of horizontal drilling and new completion technology during the past decade, the production decline in the Permian has been reversed and the basin has eclipsed its previous peak,” said IHS Markit’s Pete Stark, executive director, upstream research.

“The significance of this second production peak cannot be overstated, since it truly revived a basin, and in many ways, the U.S. E&P industry. When we consider the impact on the world’s crude markets, the Permian has to be considered a global disrupter.”

IHS Markit researchers said the Permian is of such significance to the global oil and gas industry that the basin is the model they use as the benchmark for its ongoing research study “Super Basins: The Basins that Keep on Giving Analysis.” Researchers identified more than onshore 25 super basins with multiple reservoirs and source rocks, diverse play types across numerous geologic horizons, infrastructure with access to markets, and established service sector and supply chains.

IHS Markit researchers estimate the potential upside recoverable oil from 25 global super basins to be about 840 billion bbl. This is far larger than the resources required to generate the 40 million b/d of new oil supplies that may be required to meet estimated 2040 global oil demand, said the researchers.

“The key question for truly optimizing the potential of these super basins is whether the global petroleum industry has the wherewithal to successfully implement the Permian Basin model in mostly onshore, international super basins,” said IHS Markit’s Jerry Kepes, executive director, plays and basins.