A big drilling activity increase in Texas, and in the Permian Basin in particular, sent the U.S. rig count soaring 13 units higher to 663 for the week ended Friday (March 11), according to updated numbers from Baker Hughes Co. (BKR). 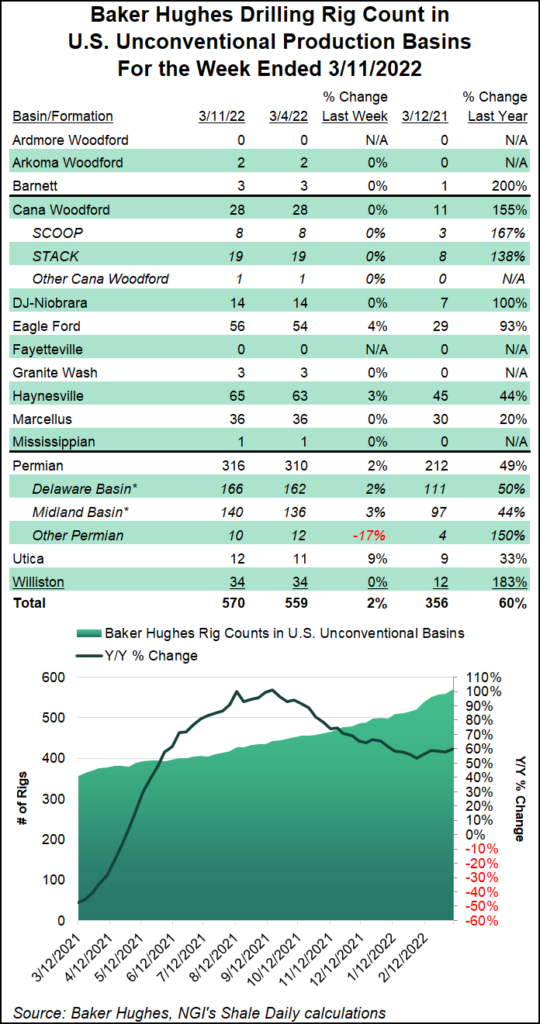 Increases of eight oil-directed rigs and five natural gas-directed rigs saw the United States exit the week with 261 more active units than in the year-earlier period. U.S. land rigs increased by 14, partially offset by a one-rig decline in the Gulf of Mexico, according to the BKR numbers, which are based in part on data from Enverus.

The Canadian rig count, meanwhile, fell 11 units to end the week at 206, up from 116 in the year-earlier period. Declines there included seven oil-directed rigs, three natural gas-directed rigs and one miscellaneous unit.

Looking at changes among major drilling regions, the Permian led with an increase of six rigs week/week, raising its total to 316, up from 212 a year ago. The Eagle Ford and Haynesville shales each added two rigs to their respective totals for the week, while one rig was added in the Utica Shale, the BKR data show.

Broken down by state, Texas saw a 12-rig increase overall, according to BKR. Ohio and Wyoming each added a rig, while New Mexico saw a net decline of one rig for the period.

Earlier in the week, the Energy Information Administration (EIA) released its latest Short-Term Energy Outlook, in which it forecast Brent crude oil prices of $116/bbl for 2Q2022. However, the agency cautioned that Russia’s invasion of Ukraine has clouded the outlook for energy markets.

The Covid-19 pandemic had already created “greater-than-usual uncertainty” in EIA’s forecasting, and “this uncertainty has increased significantly following Russia’s further invasion of Ukraine,” according to the agency.

Among the key developments that could impact oil markets moving forward, researchers said nations besides the United States could ban imports of Russian energy or announce further sanctions. Independent actions by corporations could also impact Russia’s oil production, they said.

Meanwhile, producers not working in Russia could increase output in response to higher prices, according to the agency.

“We expect global oil production in 2022 will increase to the point of beginning to restore depleted global inventories, which could contribute to some declines in crude oil prices. However, the Russian action in Ukraine and the global response to it make these forecasts highly uncertain,” researchers said.