Propelled by sizable gains in the Permian Basin and Haynesville Shale, the U.S. rig count surged eight units higher to reach 448 during the week ended Friday (May 7), according to data from oilfield services provider Baker Hughes Co. (BKR). 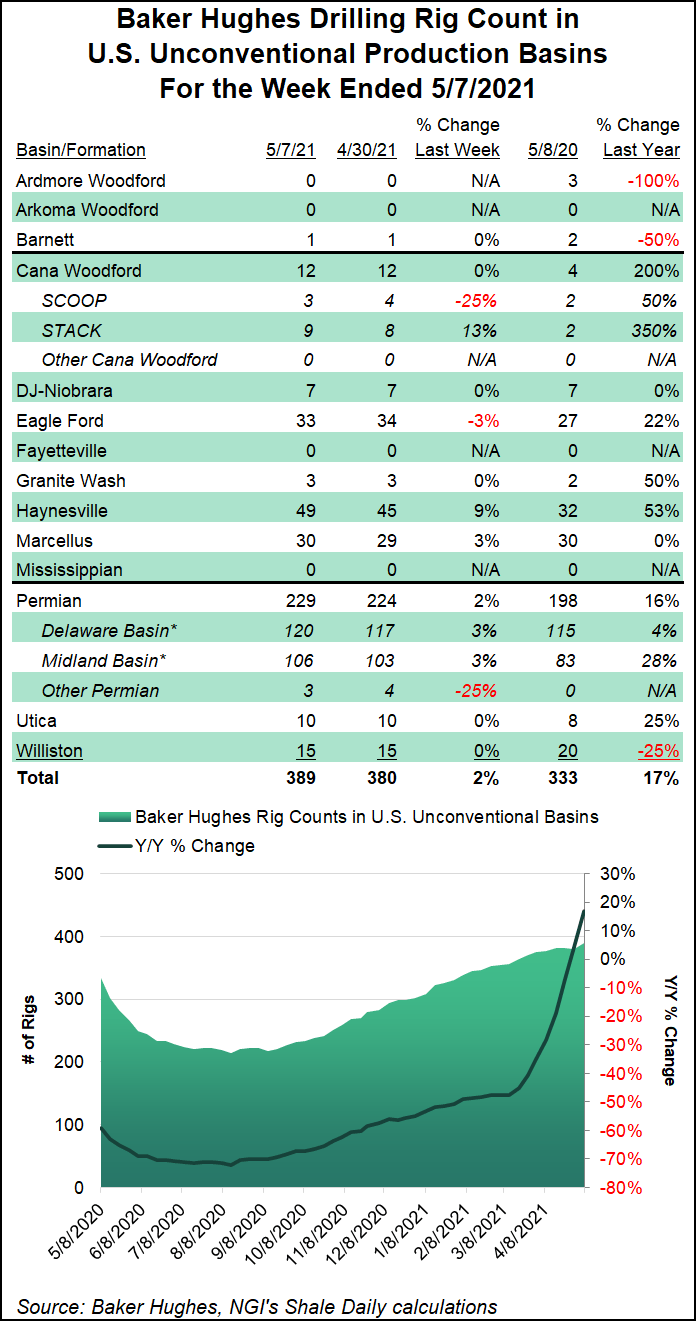 Seven natural gas-directed rigs and two oil-directed rigs were added in the United States for the period, offsetting a decline of one miscellaneous unit. The combined U.S. tally finished the week 74 units ahead of the 374 rigs active in the year-ago period, according to the BKR numbers, which are based partly on data from Enverus.

In Canada, two oil-directed rigs and two natural gas-directed rigs were added for the period, raising the overall Canadian count four units to 55 as of Friday. That’s a 29-rig increase over the 26 rigs active at this time last year, according to BKR.

Broken down by play, the Permian and the Haynesville saw the lion’s share of the gains during the week. The Permian added five rigs to up its total to 229, improving on the Covid-impacted year-ago count by 31 rigs. The gassy Haynesville, meanwhile, upped its total four units to 49, versus 32 a year ago.

Elsewhere among plays, the Marcellus Shale added one rig, while the Eagle Ford Shale dropped one from its total.

Broken down by state, Texas added five rigs for the week, while Louisiana added three. Pennsylvania and Utah each added one rig, while California dropped one, the BKR data show.

Meanwhile, after fetching $4.61/Mcf for its Permian natural gas in the first quarter, APA Corp. is stepping up its activity in some prospects and extending its exploration in Texas, executives said Thursday.

The Houston-based explorer, which operates in the gassy Alpine High development in the Permian Delaware sub-basin of West Texas, saw realized U.S. natural gas prices during the first quarter jump to $4.61/Mcf from 70 cents a year ago and from $1.68 in 4Q2020.