Increased drilling activity in the Permian Basin and in the Gulf of Mexico (GOM) helped lift the U.S. rig count seven units higher to 528 for the week ended Friday (Oct. 1), according to the latest numbers from Baker Hughes Co. (BKR). 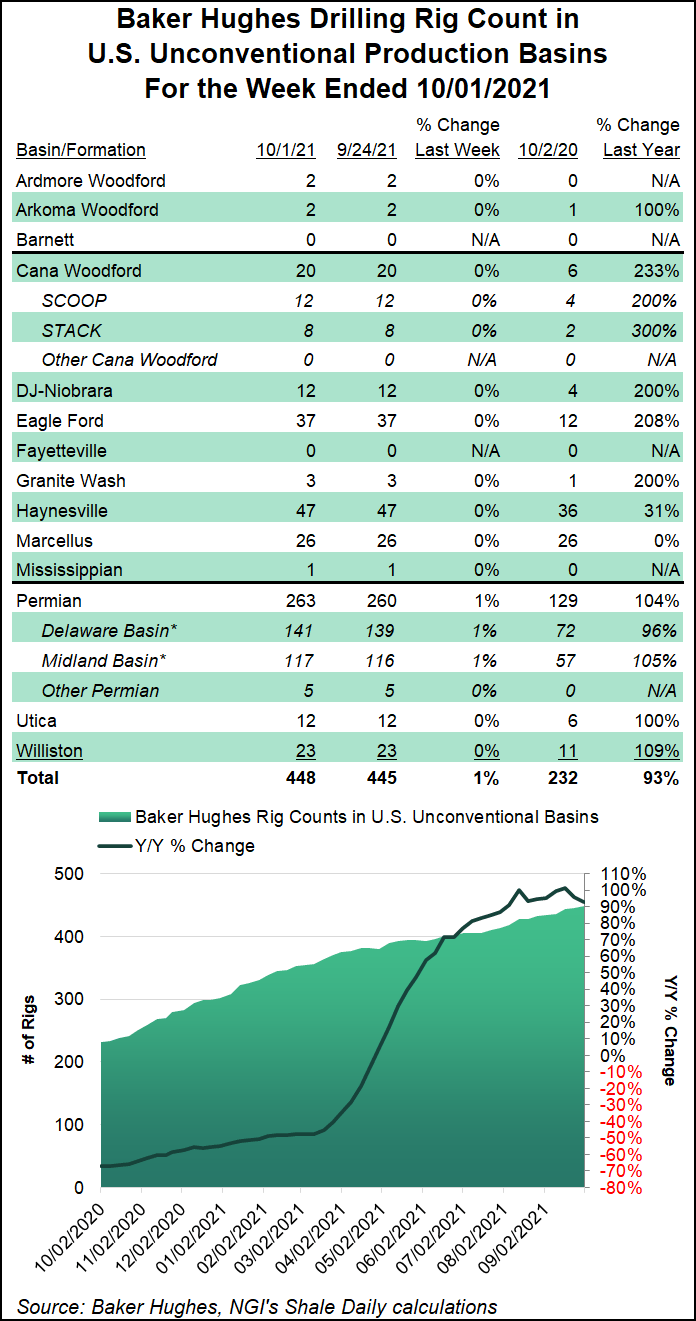 The total number of natural gas-directed rigs operating domestically was unchanged for the week, with oil-directed rigs accounting for the entirety of the overall net gain. Land drilling increased by four, while the GOM saw its total rise three units to 11. The United States ended the week with nearly double the 266 rigs running in the year-earlier period.

Horizontal rigs increased by three in the United States, with directional rigs and vertical rigs each increasing by two overall, according to the BKR numbers, which are based partly on data from Enverus.

The Canadian rig count rose three units to 165 for the week, up from 75 a year ago. Changes included gains of three natural gas-directed rigs and one oil-directed rig, partially offset by the departure of one miscellaneous unit.

Broken down by major play, the Permian posted a three-rig week/week increase, upping its total to 263. That’s up from 129 rigs running in the West Texas and southeastern New Mexico play at this time last year.

In the state-by-state breakdown, Louisiana added three units to its total during the week, with New Mexico adding two. Oklahoma and Texas each added one rig to their respective totals, according to the BKR data.

A lack of investment in the oil industry threatens to lead to further volatility and a future energy shortfall, the Organization of the Petroleum Exporting Countries (OPEC) said recently.

In its 15th Annual World Oil Outlook (WOO) released Tuesday, the Saudi-led cartel said underinvestment remained one of the “great challenges” for the oil industry. This was exacerbated by the Covid-19 pandemic, with investments declining by around 30% in 2020.

Meanwhile, global oil and natural gas explorers made some wrong-way bets on the direction of commodity prices during 2Q2021, with hedging losses for 90 of the biggest U.S. and overseas producers totaling $11 billion, the Energy Information Administration (EIA) said Wednesday.

“In this study of 90 companies, the combined petroleum liquids production level decreased 3% in 2Q2021 from 2Q2020, and natural gas production remained the same,” the EIA researchers said.