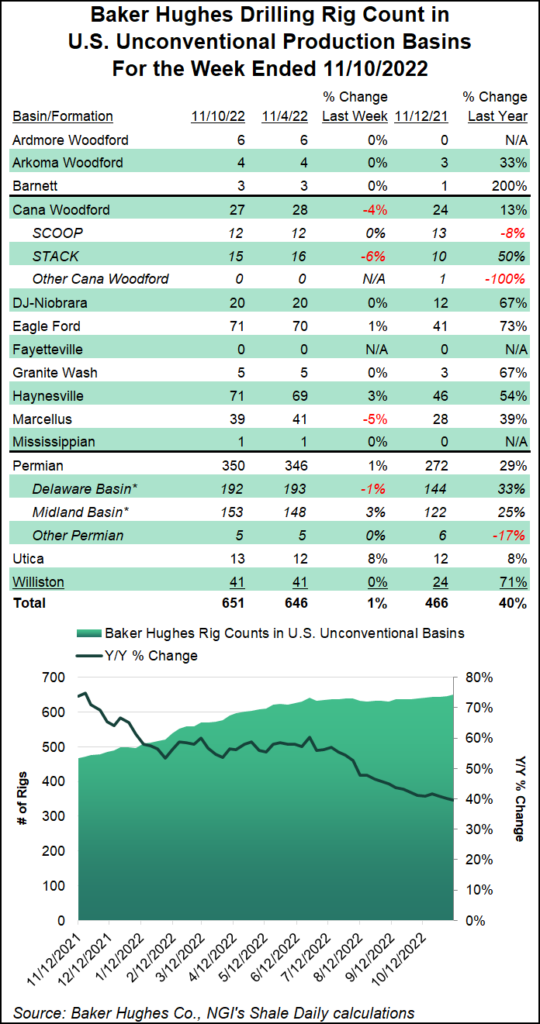 Oil-directed drilling accounted for the entirety of the domestic gains for the period, as the natural gas rig count was unchanged week/week at 155.

Land drilling increased by four in the United States, while two rigs were added in inland waters. The GOM added three rigs to raise its total to 16, up from 15 in the year-earlier period. Six horizontal rigs were added domestically, alongside three directional units.

The combined 779 active U.S. rigs as of Friday compares with 556 rigs running a year ago, according to the BKR numbers, which are partly based on data from Enverus.

The Canadian rig count dropped nine units for the week to fall to 200, versus 168 in the year-ago period. Changes there included declines of eight oil-directed rigs and one natural gas-directed unit.

Counting by major drilling region, the Permian picked up four rigs for the period, while the Haynesville Shale added two. On the other side of the ledger, the Marcellus Shale dropped two rigs from its total for the week, falling to 39 rigs, versus 28 a year ago.

Elsewhere among plays, the Eagle Ford and Utica shales each added a rig to their respective totals, while the Cana Woodford saw a one-rig decline for the period.

In the state-by-state count, Louisiana led with an increase of six rigs for the week, while Texas added four rigs to its total. Ohio added one rig week/week, while Pennsylvania posted a two-rig decline, the BKR data show.

OPEC has slashed its global crude oil demand outlook for a second consecutive month, citing slowing economic activity in the United States and Europe as well as ongoing pandemic-related lockdowns in China and geopolitical upheaval linked to Russia’s war in Ukraine.

In its closely watched monthly market report, the cartel on Monday lowered its forecast for global oil demand growth this year by 100,000 b/d to 2.5 million b/d. It lowered its 2023 growth outlook by the same amount to 2.2 million b/d. This followed a downgrade a month earlier.

OPEC also dropped its estimate for the amount of crude it would need to pump to meet demand in the current quarter by 520,000 b/d. That followed a similar downgrade a month earlier and furthered the case for the group’s move this month – along with allies known as OPEC-plus — to cut its members’ collective output by 2 million b/d.