Another severe winter storm on Wednesday began extending its icy claws through the Bakken Shale and into the Midcontinent producing areas, bringing snow, sleet and ice that was expected to reach the Permian Basin by Thursday and then move as far south as Central Texas, weather forecasters said. 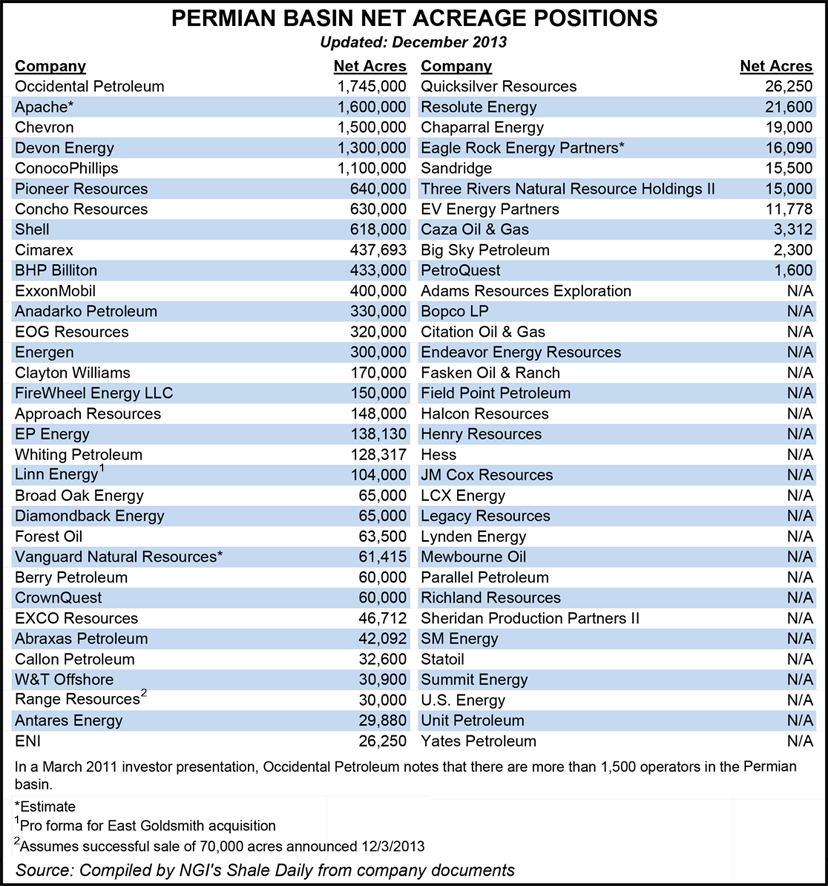 Dubbed Cleon, the storm follows a blast last week that disrupted Permian Basin operations, particularly in the Midland Basin of Texas. On Monday Pioneer Natural Resources Co. said its outlook for 4Q2013 production may be at the lower end of its forecast (see Daily GPI, Dec. 2). And on Tuesday Energen Corp., another big Permian operator, reported similar issues.

“The magnitude of this unanticipated weather event could result in Energen’s 2013 production falling below the company’s guidance range of 23.4-23.8 million boe,” Energen management said. The Birmingham, AL-based operator issued its full-year guidance estimates in late October.

“While all areas in the Permian Basin were affected to some degree, the company’s Midland Basin operations took the brunt of the ice storm’s immediate impacts, including widespread power outages, trucking curtailments (water and oil), limited access to production and drilling facilities, and frozen facilities,” Energen management noted. “Roads are now clear and rigs are back working, but power has not yet been restored to all producing areas.”

Like Pioneer, Energen said it could be “several weeks before the more indirect impacts of the storm (e.g., construction delays, repairs as the company returns to routine operations, etc.).”

Cleon will have a far bigger effect on the country.

“Winter storm Cleon will be a long-lasting event that will impact much of the nation through the week,” said Wunderground.com winter weather expert Tom Niziol and meteorologist Tom Moore. “The main story will be another reinforcing bout of very cold air that moves from the northern Plains all the way south to Texas through the week.”

The National Weather Service (NWS) in Grand Forks, ND, early Wednesday posted an urgent message indicating that snow was to continue through Wednesday and into Thursday throughout all of eastern North Dakota and northwest and west-central Minnesota.

Sharply colder winter weather also was set to arrive on Thursday in southeast New Mexico and most of West Texas, home to the Permian Basin. Highs in the 70s on Wednesday were expected to fall into the 20s and 30s east of the Pecos River, with the colder air to move deeper into the state by Friday.

“Temperatures will become cold enough Thursday morning for a mix of freezing rain and sleet from the southeast New Mexico Plains…eastward across the Permian Basin,” NWS forecasters said. “The greatest sleet and snow accumulations will be the northern Permian Basin and western Low Rolling Plains.”

Weather 2000 meteorologists on Wednesday said their forecasted model underestimated the amount of Arctic air now pouring into portions of the natural gas-weighted central United States. “Regardless of model/vendor vagaries, the USA will in fact experience the coldest November-December in over a decade.”

Pipeliners were alerting customers of possible wintry impacts, with El Paso Natural Gas Co. (EPNG), which runs from West Texas across New Mexico and Arizona to the border of southern California, noting that below-average temperatures were expected “through the weekend and into the first half of next week and as such the potential for supply shortfalls due to freeze-offs exists.”

Permian operators still have operational problems from last week’s storm to contend with.

Wunderlich Securities analyst Irene Haas told NGI’s Shale Daily that the freezing weather that hit West Texas mostly impacted the emerging operations within the Permian, where horizontal drilling techniques have unlocked a lot of oil and gas, but where infrastructure remains limited.

“A lot of producers have stepped out of the ‘traditional’ producing regions…into a lot of new resource plays like the Midland,” she said. “These are in the early stages, before gathering systems have been constructed. You do go through a period of a little vulnerability in those situations, where you have to truck oil out and water in…

“Moving the footprint from the traditionally Central Permian platform tends to not have exactly the imposing footprint” of the Permian’s central operations. That’s particularly true in the Wolfcamp and Spraberry formations, she said.

“It’s similar to what happened in the Bakken Shale” as it began to ramp up a few years ago, Haas noted. Before infrastructure was built out, wintry weather shut down production in early stage drilling areas.

In addition to Pioneer and Energen, other Permian-focused producers affected by last week’s storm included Concho Resources Inc., which “had some freezing but it has no plans to update its production guidance,” said Haas.

Approach Resources Inc. also had “weather issues,” and an “area of operations experienced severe weather and freezing temperatures, but the team is working hard to minimize any impact,” she said. Operations currently are normal.

Laredo Petroleum Holdings Inc., also a big Permian operator, is continuing to “assess the situation,” Haas added. “It’s had some weather issues, icy roads, but they were short-lived. The full impact, the downtime, isn’t known yet.”