Ring Energy Inc. is off to a strong start to the year, drilling six Permian Basin wells during the first quarter and placing four new wells into production, the independent exploration and production (E&P) company reported. 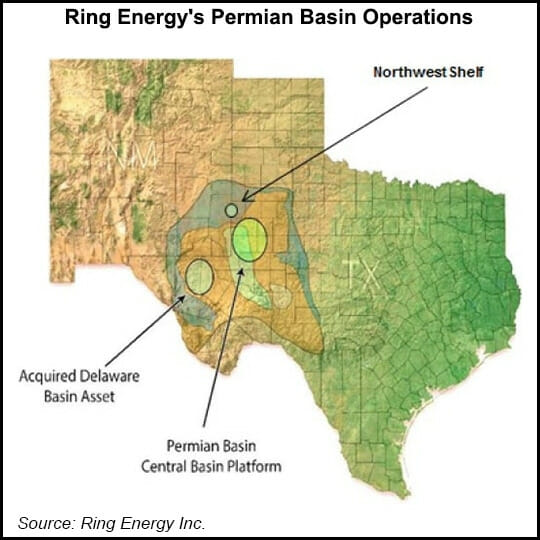 “Our operations teams continue to perform efficiently and effectively maintaining our base production and bringing on new development wells ahead of schedule,” CEO Paul D. McKinney said in a 1Q2022 operations update on Tuesday.

The E&P drilled four wells in the Permian’s Central Basin Platform (CBP) and another two in the Northwest Shelf (NWS) reservoir. The four CBP wells brought into production during the quarter were double the number it had projected would ramp up in mid-March.

Ring during the quarter reported 85% oil-weighted sales volumes of about 8,870 boe/d, topping the 8,500-8,700 boe/d initially projected. The company attributed its improved sales to placing wells on production sooner than expected and optimizing production with field compressor installs, leading to an overall increase in natural  gas sales.

Ring increased its Permian gas sales as the basin faces mounting takeaway constraints, which could be tempered by faltering demand.

According to Ring, it benefited in the quarter “from increased commodity prices with the majority of its low-price legacy oil hedges expiring at year-end 2021 and no natural gas price hedges in place” this year.

“The combination of stronger-than-anticipated sales, improved commodity prices and our continued focus on driving cost efficiencies enabled us to not only generate free cash flow for a 10th consecutive quarter, but also allowed us to pay down $10 million in debt during the quarter,” said McKinney. “Our performance this quarter establishes a solid foundation for 2022 and encourages us to continue executing on our value-focused, proven strategy.”