Oil-weighted exploration and production (E&P) companies operating in the prolific Permian Basin have 65% of their output hedged at an average strike price of $50/bbl, which supports aggressive drilling targets this year, according to IHS Markit. 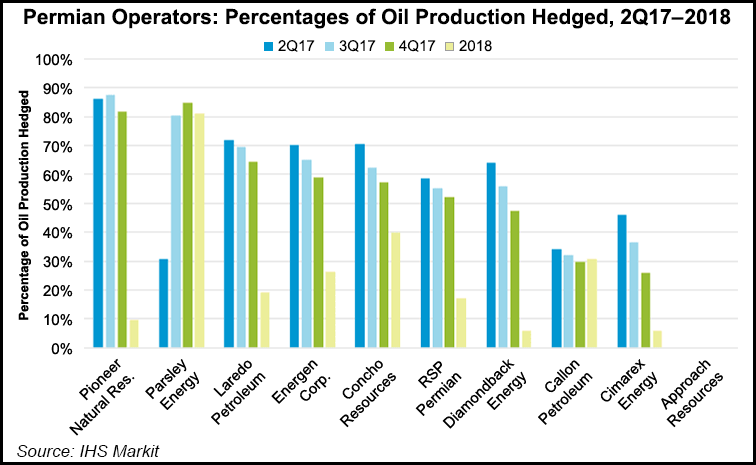 The new review evaluated hedging in place for a group of 18 oil-weighted domestic operators in the IHS Markit coverage universe, including a subgroup of 10 Permian-focused E&Ps.

Hedging by Permian E&Ps compared with only 19% of oil production and 29% of gas production hedged this year by the E&Ps not working the Permian within IHS Markit’s oil-weighted peer group.

By locking in a substantially higher portion of output, the Permian operators have support for an aggressive push to build production levels, said researchers.

“The different levels of hedging between the two oil-weighted subgroups of Permian versus non-Permian E&P operators is reflected in the wide disparity of their production growth targets, and the difference is striking,” said IHS Markit’s Paul O’Donnell, author of the hedging analysis. “The median Permian E&P is expected to increase its production by 25% in 2017, as compared to those oil-weighted operators outside the Permian who have hedged just 19% of 2017 oil production and are anticipating a median decline of 1% in oil/liquids production.

“Consequently, we expect the Permian E&Ps will be less likely to downwardly revise 2017 spending plans and production targets in the upcoming second-quarter 2017 earnings announcements, compared with their non-Permian counterparts.”

Companies hedge production to provide a level of protection against commodity price fluctuations. When prices were volatile through most of 2015 and 2016, North American E&Ps benefited from having large hedge books, O’Donnell said.

“In 2017, hedging is still important for these E&Ps, especially the more debt-laden companies, which are less likely to withstand sustained low prices or significant price fluctuations,” he said.

“The oil-weighted peer group increased its 2017 oil hedging from 22% to 34% since the time of our previous hedging study, based off of third-quarter 2016 data.”

“At present, it would be a challenge for the Permian E&Ps to replicate their 2017 hedge positions in 2018, given the weakness in oil prices and the relatively flat futures curve,” O’Donnell said.