Amid continued expansion in the Permian Basin, the U.S. rig count climbed three units overall to reach 673 for the week ended Friday (April 1), according to the latest numbers from Baker Hughes Co. (BKR). 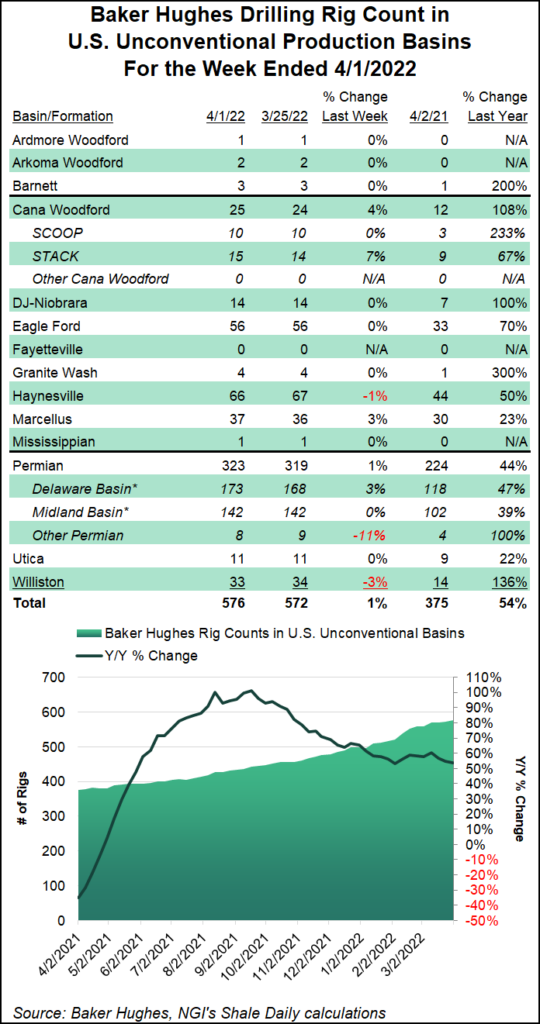 Two oil-directed rigs and one natural gas-directed rig were added in the United States for the period, putting the combined domestic tally nearly 250 units ahead of its year-earlier total of 430, according to the BKR numbers, which are partly based on data from Enverus.

The Canadian rig count fell 16 units to 124, versus 69 rigs in the year-earlier period. Changes there included declines of 12 oil-directed rigs and four natural gas-directed units.

Broken down by major play, the Permian continued to lead the way in U.S. onshore activity, with E&Ps adding four rigs to raise the total to 323, up from 224 in the year-ago period. Elsewhere among plays, the Cana Woodford and Marcellus Shale each added one rig, while the Haynesville Shale and Williston Basin each posted one-rig declines for the period.

The White House said the release from the Strategic Petroleum Reserve came after consulting “with allies and partners.” The “largest release of oil reserves in history would put 1 million b/d of additional supply on the market every day for the next six months,” officials said.

The release will provide a “historic amount of supply to serve as a bridge until the end of the year when domestic production ramps up,” they added.

Production for the week ended March 25 ticked up to 11.7 million b/d after holding at 11.6 million b/d through all of February and most of March, EIA’s latest Weekly Petroleum Status Report showed. American producers have been under pressure to increase crude supplies amid mounting global demand and waning Russian oil exports during the Kremlin’s war in Ukraine.