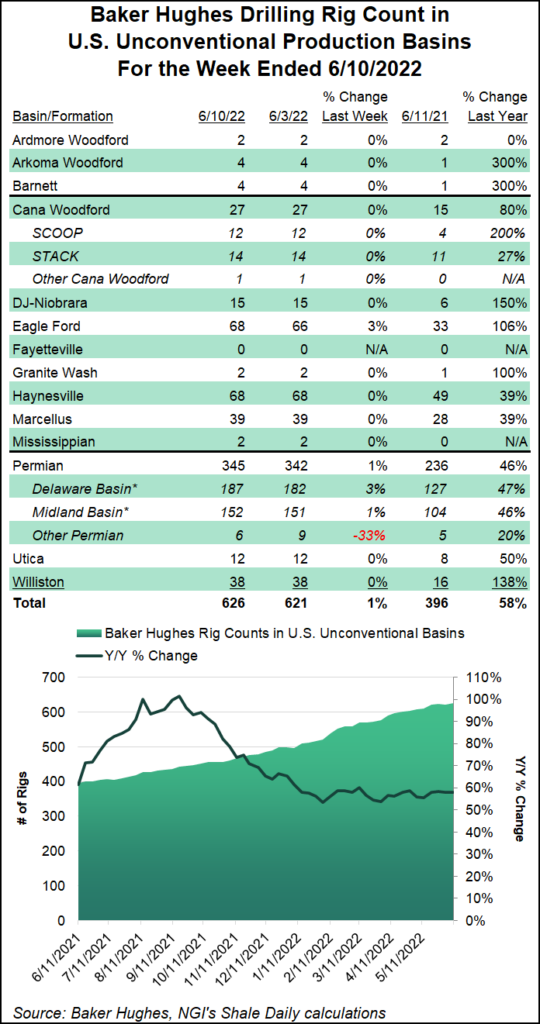 Total natural gas-directed rigs were unchanged domestically for the week, while oil-directed rigs increased by six. Gains of five land-directed rigs and two rigs in inland waters were partially offset by a one-rig decline in the Gulf of Mexico. Directional, horizontal and vertical rig totals each increased by two.

The combined 733 active U.S. rigs as of Friday compares with 461 rigs running in the year-earlier period, according to the BKR numbers, which are partly based on data from Enverus.

The Canadian rig count, meanwhile, surged 24 units higher to reach 141 for the week, up from 93 in the year-earlier period. Gains there included 22 oil-directed rigs and two natural gas-directed rigs.

Counting by major basin, the Permian led with an increase of three rigs week/week, raising its total to 345, up from 236 a year ago. The Eagle Ford added two rigs to raise its tally to 68. That’s more than double the 33 rigs running there at this time last year, according to the BKR data.

In the state-by-state count, New Mexico saw a five-rig increase for the period, while Louisiana and Utah each added one rig. On the other side of the ledger, Texas saw a one-rig decline week/week.

Brent crude oil prices will average $108/bbl in the second half of 2022 as low global inventory levels heighten potential volatility and as geopolitical actions increase uncertainty, the Energy Information Administration (EIA) said in an updated forecast published earlier in the week.

In the wake of Russia’s invasion of Ukraine, what happens with oil prices moving forward will “largely depend on the degree to which existing sanctions imposed on Russia, any potential future sanctions and independent corporate actions affect Russia’s oil production” or the sale of that oil into the global market, researchers said.

Output was flat at 11.9 million b/d for the week ended June 3, EIA said. It marked the fourth straight week in which production was held at that level. While that steady pace marks a high point for the year, it remains more than 1.0 million b/d below the pre-pandemic peak.