Texas’ oil and natural gas industry paid $15.8 billion in state and local taxes and state royalties in Fiscal Year (FY) 2021, with school districts and counties in the Permian Basin and Eagle Ford Shale the top beneficiaries, according to the Texas Oil and Gas Association (TXOGA). 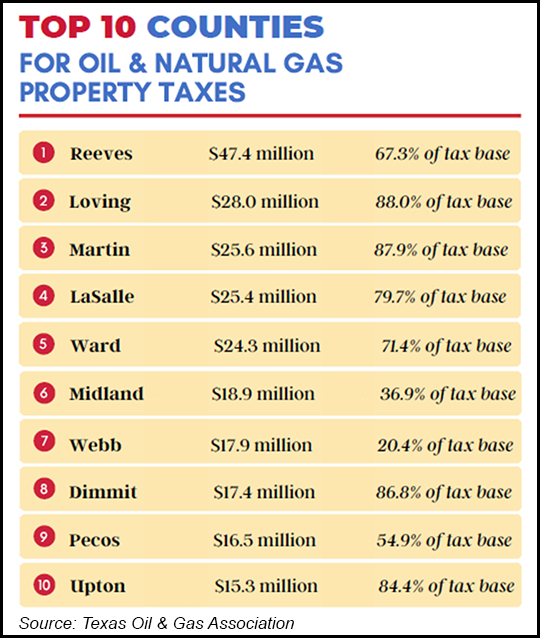 “Despite an incredibly difficult two years, the Texas oil and natural gas industry continues to contribute tremendously to state and local tax coffers,” said TXOGA President Todd Staples citing estimates from the Texas Comptroller of Public Accounts. “This revenue from oil and natural gas production, pipelines, refineries and liquefied natural gas facilities translates to well over $43 million each and every day that pay for our schools, universities, roads, first responders and essential services.”

TXOGA stated that Texas’ state royalties and production taxes increased by more than 20% in FY 2021. The trade association added that “production taxes exceeded $5 billion for only the third time in history. Royalty revenues paid to the state reached a second-to-all-time high at $2.115 billion, with only FY 2019 exceeding the performance of FY 2021.”

New Mexico, which shares the Permian with Texas, recently projected a sharp jump in oil and gas revenues for the state treasury.

Texas’ public independent school districts, or ISDs, collected $1.84 billion in property taxes in FY 2021 from oil and natural gas production, pipelines and gas utilities, TXOGA said. Just 10 of the state’s 1,200-plus ISDs, all located in the Eagle Ford or the Permian, accounted for $695.3 million – more than 64% – of that $1.84 billion.

TXOGA also noted that Texas counties received $640 million in property taxes from oil and natural gas production, pipelines and gas utilities in FY 2021. Nearly $237 million, or about 37%, of that $640 million in tax receipts went to just 10 of Texas’ 254 counties. Those 10 counties overlay the Permian or the Eagle Ford.

TXOGA noted that 98% of Texas’ oil and gas royalties were deposited into the PSF and PUF in 2021, with $1.099 billion going into the former and $979 million to the latter. During the same period, the Rainy Day Fund received $1.134 billion from oil and gas production taxes, the trade association added.

Besides providing more revenue to Texas’ state and local governments in 2021, the oil and gas industry is making progress on the environmental front, noted TXOGA.

“Methane emissions are down dramatically, even as oil and natural gas production increases,” said Staples. “Flaring rates in Texas are at record lows, and Texas-produced LNG is an environmental game-changer for nations around the world.”

In early December, the Railroad Commission of Texas (RRC) said its production data showed the statewide gas-flaring rate “fell to a record low level in September.” The RRC noted the percentage of natural gas flared dropped from a previous record of 0.61% in July to 0.21% in September.

According to the RRC, Texas boasts “one of the lowest flaring rates of large oil and gas producing states in the country with an average rate of flaring that has remained significantly less than 2% for more than two years.”

To put Texas’ flaring rate into context, an RRC member observed at an NGI-sponsored event in November that the flaring rate is much higher south of the Rio Grande. During the U.S.-Mexico LDC Forum in San Antonio, TX, Commissioner Jim Wright said that Petróleos Mexicanos (Pemex) flared 13% of its gas output in the third quarter of 2021.

Pemex’s CEO previously said the national oil company aims to lower the flaring rate to 2% in 2022.