Aerial methane measurements taken during August in the Permian Basin indicate the oil and gas industry continues to have issues in controlling flaring and venting, the Environmental Defense Fund (EDF) said Thursday. 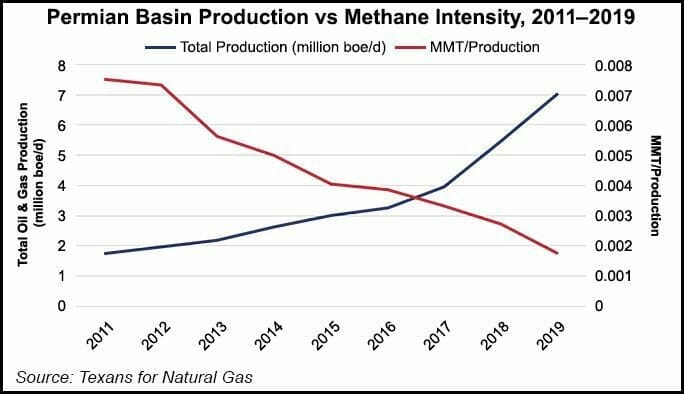 The EDF’s ongoing Permian Methane Analysis Project, aka PermianMAP, is collecting methane emissions from the air, via towers and on the ground across a 10,000 square-kilometer grid, or a grid of around 6,200 square miles, that spans the Delaware sub-basin.

“The new data was collected during an 11-day period in August,” according to EDF. “The aircraft detected over 900 plumes of methane from more than 500 sources. As with previous surveys of the area, this new data again confirms that super-emitting sites continue to be a problem across the Permian.”

The Delaware, which extends from West Texas into southeastern New Mexico, contains around 10% of the region’s active wells but produces 40% of the basin’s oil and gas, the researchers noted.

In about one-week’s time, the aircraft “detected nearly 50 plumes” that were emitting at least 1 metric ton/hour of methane. “Large emissions persisted over multiple days at approximately

30% of these sites; the remainder were intermittent.”

Production sites account for a lot of emissions through flaring and venting. However, the latest survey found that the Delaware’s midstream facilities, which gather and treat gas, were responsible for close to half of the plumes.

In addition, “nearly one out of every 10 emission sources identified” were from lower producing, or marginal, wells.

“What this data tells us is that even after two years of increased focus on the oil and gas industry’s methane emissions, this problem remains,” said EDF senior scientist David Lyon. “This underlines the importance of strong, comprehensive action from state and federal regulators to clean up this industry and protect local communities from pollution.”

emissions. While Texas regulators have taken steps to reduce flaring and venting by individual producers, they have “yet to to take meaningful action to address the problem,” EDF noted.

The recent survey’s findings coincide with a recent pact announced by the United States and European Union to reduce methane emissions levels by 30% in 2030 from 2020 levels.

The U.S. Environmental Protection Agency also has a proposed rulemaking underway that could reduce oil and methane emissions, including from midstream facilities.