The U.S. rig count dropped two units to finish at 988 for the week ended May 10, including a decline in Permian Basin activity, according to data from Baker Hughes, a GE Company (BHGE). 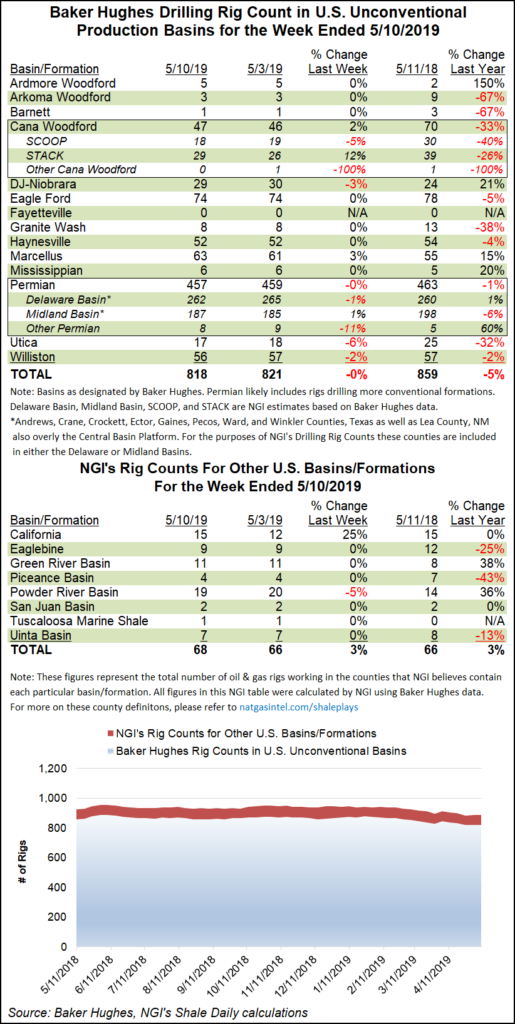 Two domestic oil-directed rigs exited the patch, while U.S. natural gas-directed drilling and activity in the Gulf of Mexico held flat for the week, BHGE data showed. One horizontal unit and one vertical unit departed, while the number of directional rigs held steady at 71.

The Canadian rig count posted a net gain on the week, adding two units to finish at 63, down from 79 a year ago. Changes included the addition of five oil-directed rigs, offsetting the departure of three gas-directed. The combined North American rig count finished unchanged week/week at 1,051, down from 1,124 active rigs in the year-ago period.

Among plays, the Permian saw the largest weekly decline, losing two rigs to end the week with 457, versus 463 at this time last year. The Marcellus Shale, meanwhile, added two rigs to grow to 63, up from 55 a year ago.

The Cana Woodford added one rig, while the Denver Julesburg-Niobrara, Utica Shale and Williston Basin each dropped one rig for the week, according to BHGE.

Also among states, Louisiana and North Dakota each dropped one rig, while Pennsylvania and Texas each added one.

The bidding war to buy up Anadarko Petroleum Corp., an acquisition that could have major implications for the U.S. onshore, appears to be coming to a close. Chevron Corp. said last Thursday it would not make a counterproposal to a substantial offer to acquire Anadarko, which would appear to give Occidental Petroleum Corp. (Oxy), whose U.S. assets are focused in the Permian, a global oil and natural gas prize.

“Winning in any environment doesn’t mean winning at any cost,” Chevron CEO Michael Wirth said. “Cost and capital discipline always matter, and we will not dilute our returns or erode value for our shareholders for the sake of doing a deal.

“Our advantaged portfolio is driving robust production and cash flow growth, higher investment returns and lower execution risk. We are well positioned to deliver superior value creation for our shareholders.”

Prior to Chevron’s announcement, Oxy had substantially increased its offer to take over Anadarko, with Oxy CEO Vicki Hollub sending a letter to the Anadarko board offering $76/share.

“We firmly believe that Occidental is uniquely positioned to drive significant value and growth from Anadarko’s highly complementary asset portfolio,” Hollub said. “This combination will create a global energy leader with the scale and geographic diversification to drive compelling returns to the shareholders of both companies.”