For the first time in more than two years, Schlumberger Ltd.’s revenues were stronger from its international operations than in North America, where “reservoir- and production-related challenges” are emerging, CEO Paal Kibsgaard said Friday. 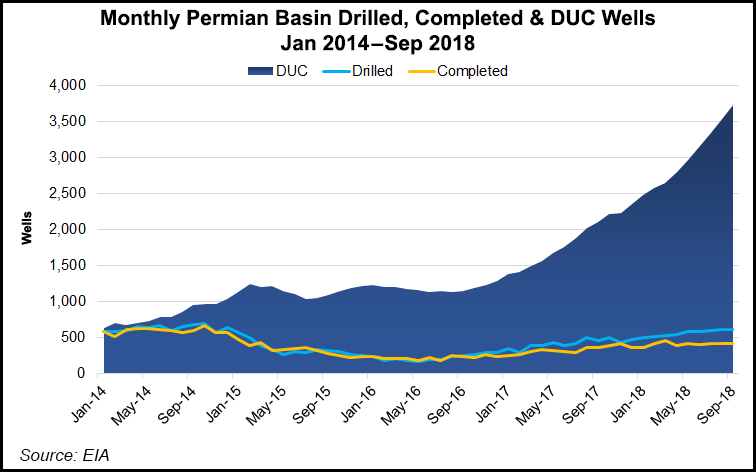 Takeaway constraints in North America, particularly in the Permian Basin, should be resolved within the next year to 18 months, but growing onshore challenges could hinder even the most optimistic projections for domestic oil production, he said during a conference call to discuss third quarter results.

“The dynamics of the pressure pumping market changed this quarter, and activity will likely continue to decline until the Permian takeaway capacity is resolved,” Kibsgaard said. “Accordingly, OneStim did not deploy additional hydraulic fracturing fleet capacity during the quarter.”

The company doesn’t expect to deploy more North American fracture (frack) crews through the end of the year either, he said.

A continued slowdown is expected through the end of the year and into early 2019, as exploration and production (E&P) companies reduce activity, said the CEO.

“Some of the crews that we have operating today we will need to temporarily lay down,” he said. The question is whether to lay off or furlough crews, a challenge the company is pondering “on a daily basis to minimize the impact.” At the same time, the company wants to be ready to maximize its ability to ramp up when the time is right.

“This is a dynamic U.S. land market,” Kibsgaard said. “We are used to dealing with it and reacting as best as we can.”

The “only thing” impacting North American activity and pricing is within the fracking business, he said. “Drilling and other businesses are unaffected by softening constraints. It’s frack that is the main driver.”

A dearth of pipeline and midstream capacity is hindering growth across West Texas and southeastern New Mexico, but other reservoir-related problems are cropping up in unconventional plays that could slow future output.

Slumping North American land activity was evident in the third quarter results, as the world’s No. 1 oilfield services company reported that revenue growth was stronger for the international operations for the first time since 2Q2014.

Revenue growth in North America was hurt in part by Permian constraints, which slowed the rates at which operators use fracking services to tie wells online using Schlumberger’s OneStim pressure pumping services. Kibsgaard had warned in July that Permian takeaway constraints were looming.

Fracking activity alone began to slow in the United States during the third quarter, but overall, the North American business saw robust growth in land drilling products and services, which grew 5% sequentially, outperforming the 3% increase in the U.S. land rig count.

While pressure pumping revenue for the OneStim services fell, growth was driven by the continued demand for rotary steerable systems in horizontal wells. Higher product sales of artificial lift systems also contributed to the area’s performance.

The hit to OneStim pressure pumping revenue from U.S. land was offset by “robust performance from our vertically integrated sand business, which in addition to serving OneStim now also competes in the third-party market,” Kibsgaard said.

North American revenue, excluding Cameron, increased to $2.6 billion in 3Q2018, 1% sequentially higher and 23% more than a year ago, driven by artificial lift and drilling, as the company gained market share on the back of its technology portfolio.

In the international business, revenue increased 4% sequentially to $4.6 billion, excluding Cameron, driven by 7% growth in Latin America and 3% growth in the Middle East/Asia from higher activity for both national oil companies and independents.

“From a macro perspective,” Kibsgaard said, “the oil market continued to tighten in the third quarter as seen by a further draw in global oil inventories and a significant increase in oil prices,” even with strong production from the U.S. unit and increasing output from key members of the Organization of the Petroleum Exporting Countries.

On the technology front, Schlumberger used a combination of technologies during 3Q2018 for an E&P customer working in the Marcellus Shale of Pennsylvania to achieve a new average rate of penetration (ROP) record of 415.1 feet/hour, representing a 62% improvement compared with offset runs using conventional polycrystalline diamond compact bits. The technologies included a rotary steerable system that drilled 6,891 feet in 16.6 hours.

In Ohio, a drilling system for Eclipse Resources Corp. was used to drill 18 super laterals in the Utica Shale. The average lateral length was 18,715 feet and the average ROP was 171 feet/hour. Eclipse “achieved a new drilling record for the longest lateral of 20,632 feet and the longest total horizontal well depth of 30,493 feet,” Schlumberger noted.

Meanwhile, in West Texas, OneStim’s ShalePrime rock-fluid diagnostic service was deployed for Manti Tarka Permian to increase oil production by 70% and reduce stimulation cost by 25% in a well within the Wolfcamp formation. The workflow was applied to an existing horizontal well to engineer an optimal perforation, completion, and stimulation design. In addition, the ShalePrime service was used to improve frack cleanup and maximize production.