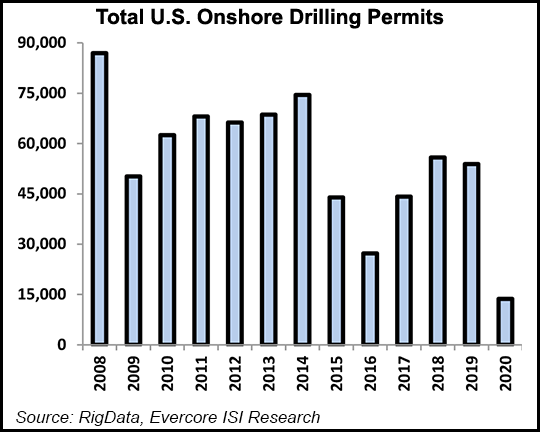 As Lower 48 operators have slashed spending and activity, the Permian Basin has taken the biggest hit to well permitting, according to an analysis of August data by Evercore ISI.

Overall permit activity fell nationwide by 28% in August month/month to 1,119 permits, according to the analyst team led by James West. Most of the applications (87%) were to drill for oil.

Public exploration and production (E&P) operators cut requests for oil permits by 29% from July. Permian activity fell 12%, while other onshore plays saw an overall decline of 51%.

The RRC District 8, in the heart of West Texas based in Midland, recorded a 19% dropoff in new permit applications last month, Evercore noted. New Mexico, which shares a substantial slice of the Permian in the southeastern part of the state, saw permit activity off 8% from July.

According to Evercore, Permian operators overall submitted 397 permits in August. However, one of the basin’s top operators, ExxonMobil, increased its permit count to 17 from one. EOG Resources Inc. and Occidental Petroleum Corp. also requested two times more permits than in July to 76, analysts noted.

Still, the gains by some E&Ps were balanced by a pullback by other Permian-heavy E&Ps. Devon Energy Corp. permit requests were down by 40 from July while Diamondback Energy Corp. requested 21 fewer.

Meanwhile, in the Bakken Shale, permits dropped by 39% month/month to 46. The decline was attributed to ExxonMobil, with 12 fewer requests, and by ConocoPhillips, off by 10 from July. Offsetting the downward trend in the Bakken in part was an increase in permit requests in the Eagle Ford Shale, up 7% month/month, and in the Denver-Julesburg Basin, which gained 3%.

“Of the 4,468 permits approved in the Permian, 11% have been filed by majors with ExxonMobil’s applications representing 6%…” The large-cap E&Ps year to date in the Permian have submitted 23% of the total, with the small-to-medium caps at 29%.

“It’s likely that the ramp in Permian permit applications from May to July, despite weaker market conditions, was partially driven by a ‘2020 presidential election hedge’ by E&Ps due to potential rollbacks of relatively favorable oil and gas regulations,” West said.

For natural gas-heavy plays, drilling permits last month climbed from July by 23% in the Haynesville Shale to 123. Operators that hiked their permit requests included Chesapeake Energy Corp., up by 14, and private E&Ps, 63 more than in July.

However, permitting in the No. 1 gas play, the Marcellus Shale, “slowed to a trickle,” off 64% from July.

The overall onshore gas permit count contracted to 153 in August, down 20% month/month, “mainly due to the downward activity by public operators in the Marcellus, which fell to 11 from 37.”

On a year-to-date basis, Evercore analysts said gas permits have contracted to 1,472, off by half from the same period of 2019.

Meanwhile, “injection permits spiked up in the Marcellus, while permits for plug and abandonment (P&A) activity slowed in the Bakken,” analysts said. P&A permitting “accelerated in New Mexico to 39 from 12, where public operators submitted 70% of that total.”

P&A permits fell month/month in the Bakken to 25 from 36, while they decreased by one in Louisiana to 38. Activity in the Marcellus, meanwhile, jumped to 41 in August from zero in July.