The U.S. rig count climbed one unit to reach 403 for the week ending Friday (March 5) as gains in Texas offset a slowdown in North Dakota, according to the latest figures from Baker Hughes Co. (BKR). 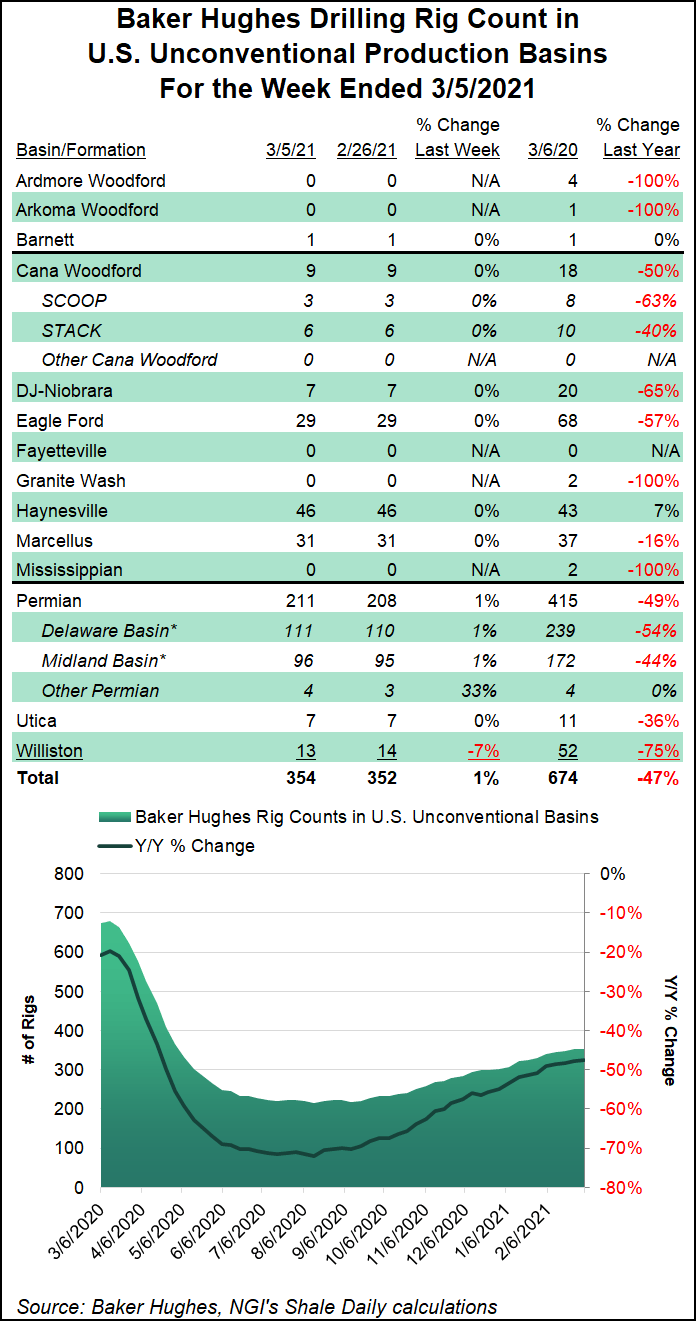 One oil-directed rig was added overall in the United States for the week, while the total number of natural gas rigs remained unchanged. The 403 rigs active as of Friday compares with 793 rigs running in the year-ago period, according to the BKR numbers, which are based in part on data provided by Enverus.

Four rigs were added on land during the week, offsetting a decline of three rigs in the Gulf of Mexico, which saw its total fall to 14, versus 23 a year ago. Horizontal rigs increased by three, while directional rigs declined by two.

In Canada, 12 oil-directed rigs and 10 gas-directed rigs exited the patch during the week. The Canadian rig count finished at 141, versus 203 in the year-ago period.

The combined North American rig count finished at 544, versus 996 at this time last year.

Broken down by play, the Permian Basin continued its growth trajectory during the week, picking up three rigs to up its total to 211. That’s still roughly half of the 415 rigs running in the West Texas and southeastern New Mexico play at this time last year. Elsewhere among plays, the Williston Basin dropped one rig to fall to 13, versus 52 a year ago.

Broken down by state, Texas added five rigs to its total week/week, while Louisiana dropped two overall. New Mexico and North Dakota each dropped one.

Members of the Organization of the Petroleum Exporting Countries and its allies, aka OPEC-plus, agreed on Thursday to hold the line on oil production in April. Analysts were braced for an increase, given a surge in oil prices this year. Brent crude prices were up more than 25% on the year prior to the meeting, an advance that many market participants had expected would lure Saudi Arabia into production rebound mode next month.

Last month’s “gnarly weather and associated power/oilfield activity impacts no doubt took some wind out” of the sails of oilfield services operators, “driving unexpected white space on the calendar and creating some logistical nightmares, but we don’t think these issues will prove long-lived,” analysts said.