Amid gains in the Permian Basin, the U.S. rig count climbed three units to 351 for the period ending Wednesday (Dec. 30), according to updated numbers published by oilfield services provider Baker Hughes Co. (BKR). 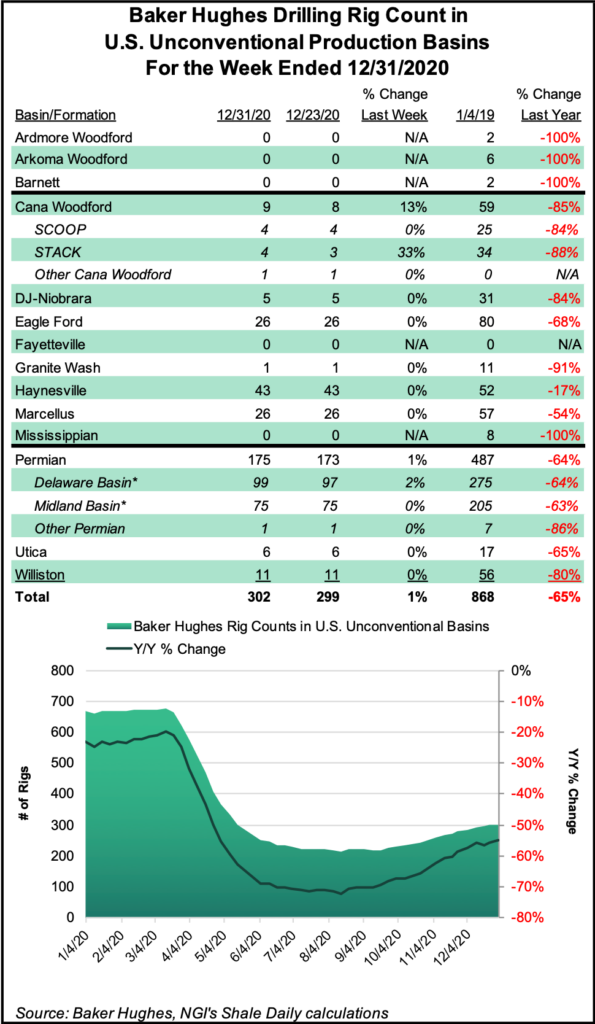 Oil-directed drilling accounted for all of the domestic rigs added for the period, according to the BKR numbers, which are based on data provided in part by Enverus. BKR released its weekly rig numbers earlier than usual ahead of Friday’s New Year’s Day holiday.

With the effects of the Covid-19 pandemic continuing to reverberate throughout the energy industry and the broader economy, the 351 active U.S. rigs as of Wednesday is down sharply from 796 rigs active at the same time last year.

Land drilling increased by three units for the week, while the Gulf of Mexico maintained its total of 17 rigs. Horizontal units increased by four, offsetting the departure of one directional rig.

In Canada, the rig count fell 23 units to 59 for the week, coming in 26 rigs behind the 85 units active there a year ago. The declines in Canada included 13 oil-directed rigs and 10 gas-directed units.

The combined North American rig count finished at 410 for the week, down from 881 a year ago.

Broken down by play, the Permian added two rigs for the period, growing its tally to 175. That’s down from 403 in the year-ago period. Elsewhere among plays, the Cana Woodford added one rig to grow its total to nine, versus 20 a year ago.

With 2020 drawing to a close, oil and gas operators are no doubt ready to close the book on what has proven a difficult year for the industry.

Supermajor Royal Dutch Shell plc recently revealed that it expects to write down between $3.5 billion to $4.5 billion during the fourth quarter because of impairments, asset restructuring and onerous contracts. It would be the third time this year the Anglo-Dutch supermajor has written down assets.

Meanwhile, as a new administration is expected to take over in Washington, DC, in January, U.S. executives have been contemplating what the global energy transition might look like moving forward. According to a recent Deloitte survey, natural gas remains essential to that transition, according to most U.S. executives, but many see a reduced or evolving role.

Deloitte surveyed more than 350 executives in the energy, resources and industrials sectors following the presidential election in November.