The U.S. rig count finished unchanged at 790 for the week ended Friday, although some shuffling among the major plays saw activity pick up in the Permian Basin during the period, according to the latest data from Baker Hughes Co. (BKR). 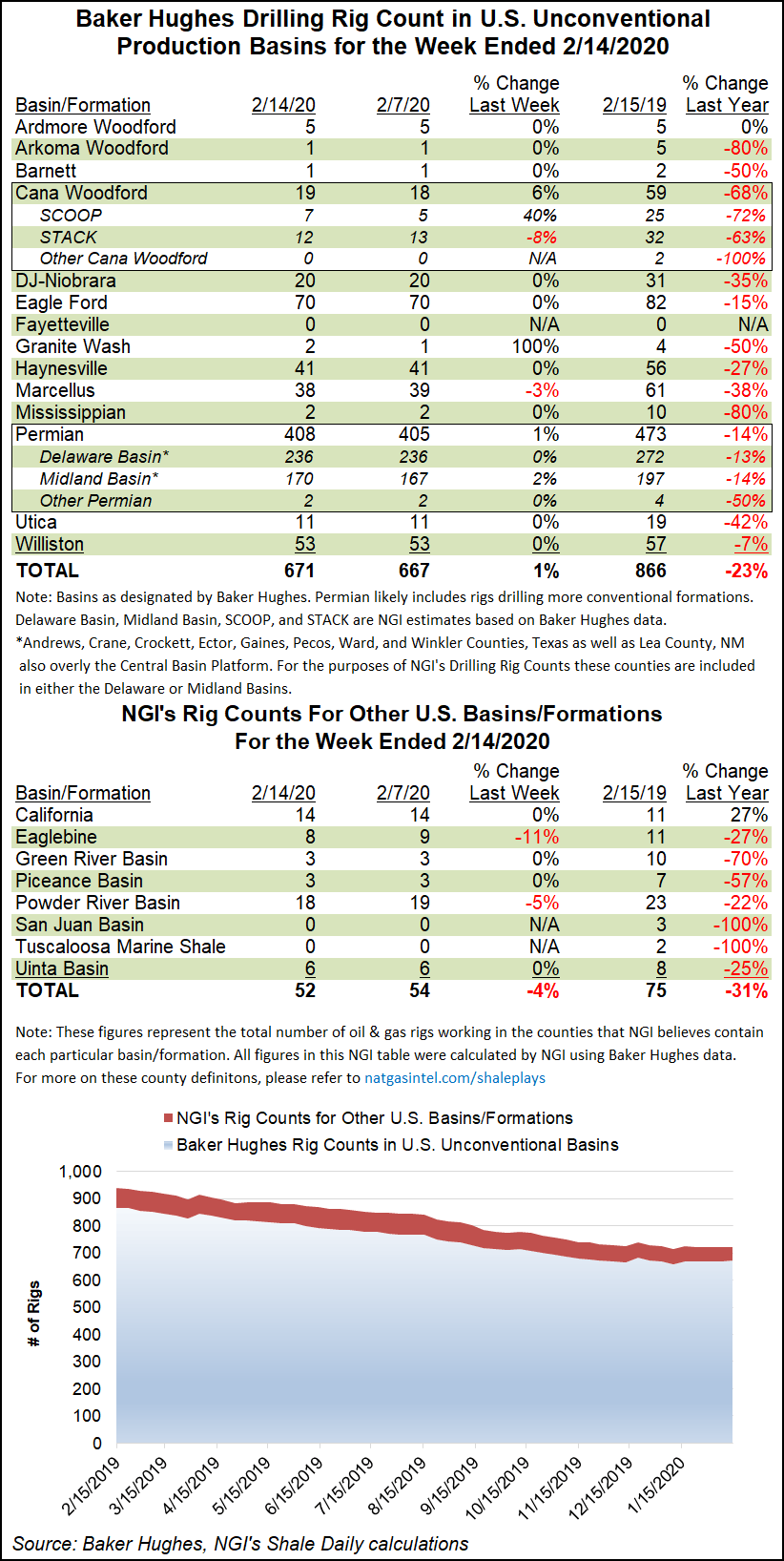 Week/week changes included a two-rig increase in the oil patch and a one-rig decline in natural gas-directed drilling. One miscellaneous rig also packed up shop, according to BKR. The U.S. count ended the week 261 units behind its year-ago total of 1,051.

The Canadian rig count fell two units to 255 for the week, up from 224 in the year-ago period. Changes included an increase of five oil-directed rigs and a decrease of seven gas-directed.

The combined North American rig count finished at 1,045, down from 1,275 at this time last year.

Among plays, the Permian Basin saw the largest week/week change, picking up three rigs to increase its total to 408. That’s off from 473 rigs a year ago. Elsewhere, the Cana Woodford and Granite Wash each added a rig, while one rig exited the Marcellus Shale.

Among states, coinciding with the uptick in the Permian, Texas added three rigs, and New Mexico added one. Also among states, Alaska, Pennsylvania and Wyoming each dropped one rig.

The volume of waste natural gas that is flared or vented at the wellhead in the Permian tripled between early 2017 and the fourth quarter of 2018 and has been range bound since then between 550 MMcf/d and 750 MMcf/d, “undoubtedly a very high volume,” analysts at Rystad Energy said during the week.

The dominant share of that flaring comes from the Permian’s Delaware sub-basin in Texas, which recently has accounted for about 40% of the total, down from the 55-60% share it held in 2016-2017, according to a report from Rystad. Still, flaring intensity in the Texas portion of the sub-basin has been stable since 2017 at 4.3-5.2%.

On the other hand, natural gas played an important role in keeping carbon dioxide (CO2) emissions in check in 2019, according to recent data from the International Energy Agency (IEA).

The IEA estimated that the world’s energy-related CO2 emissions totaled 33 gigatonnes in 2019, unchanged from the previous year even as the world economy saw a 2.9% expansion. This was made possible in part by more natural gas and less coal in the power stack. An expansion of renewables, especially wind and solar, and higher nuclear generation also proved pivotal in keeping CO2 emissions in check as the world’s economic output grew.