James Waddell, a senior global gas analyst at London-based Energy Aspects, said severe cold, production outages, shipping constraints and a scramble to find supplies are just a few of the myriad factors that have blown into the perfect storm behind a meteoric rise in Asian liquefied natural gas (LNG) prices. 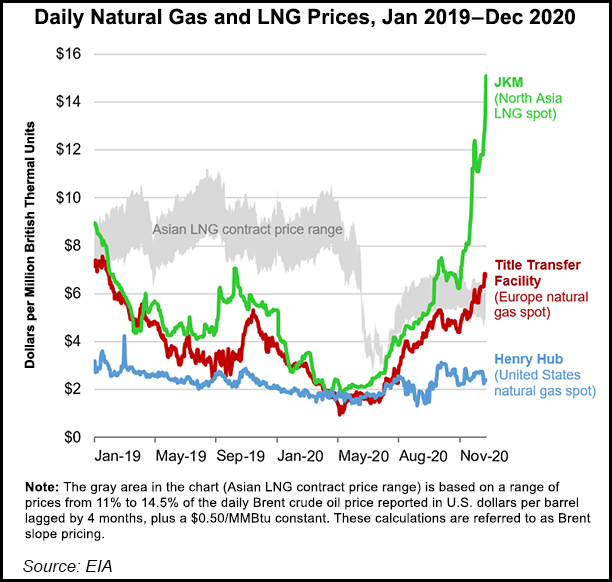 As the historic rally continues, he shares his perspective on when it might end and whether the market can expect similar patterns in the years ahead.

NGI: What’s caused LNG prices in North Asia to increase so much?

Waddell: On the supply side, you’ve had a series of global supply outages rolling on since late summer in Australia, Malaysia, Qatar, Nigeria, Trinidad and Tobago, and Norway. Generally, the supply picture has been underperforming relative to historic levels, and that has basically increased northeast Asia’s call on Atlantic Basin cargoes coming out of the United States and the European market. Those are some of the more expensive supplies for the Asian market, which has been driving prices up.

There’s also been growth in Asian demand as the region has handled the pandemic better than countries in the West, which has left economic activity less disrupted. There’s also been very intense cold, which has really been driving things up in the last few weeks. We have been seeing this particularly acutely in Japan in recent days.  In the meantime, China has been building up coal-to-gas switching, adding millions and millions of households that have now switched onto the gas market. A lot of the cargoes we’ve seen taken out of the European market have supplied the Chinese market in particular.

NGI: How has this impacted the shipping market and the ability to deliver cargoes?

Waddell: The freight picture is extremely tight right now, with a recent record rate to charter an LNG vessel of $350,000/day. Last summer, we were around $30,000-40,000/day to charter a vessel. You’re really having to pay through the nose right now to convince another company to sublet you their vessel. There has been a big increase among portfolio players and aggregators buying up shipping capacity, so there’s not that much left over in the spot market when things are very tight.

There are people trying to get spot vessels to close this arbitrage to make reloads from Europe to Asia, but they’re having to pay to do so. When you have U.S. cargoes going across the Atlantic to Europe, you don’t need that many vessels to deliver a certain amount of LNG, but when those vessels are going to Asia, you need about double the shipping tonnage. When a large proportion of U.S. LNG is going to Asia, it’s going via the Panama Canal and capacity to get through the waterway is being maxed out. There has been an increase in wait times outside of the Panama Canal of up to 10 days, which then adds to the shipping costs and the Japan Korea Marker (JKM) has to go even higher to attract those cargoes.

The cargoes are also bypassing delays at the Panama Canal by going around the Cape of Good Hope, the longest possible way U.S. cargoes can get to northeast Asia.  And as a final recourse, that hasn’t been enough to satisfy northeast Asian demand. The market is now unlocking European reloads to go to Asia, which is another very long shipping route. In order for the JKM to price on those deliveries from Europe to northeast Asia, buyers are having to pay a substantial shipping cost.

We are so tight right now at the end of January, start of February — and it takes about a month to get a cargo out of the Atlantic Basin — that it is virtually impossible to get a cargo on short enough notice to close the arbitrage. You can only really get a cargo into northeast Asia from the Atlantic Basin by the second half of February into March. The record prices we’re seeing amid this cold snap really represent an inability to get a marginal cargo and a real scramble to convince someone else in northeast Asia to not take delivery of their cargo, but to give it to someone shorter on supply.

NGI: Did all the U.S. cargo cancellations that occurred over the summer and into the fall help reduce Asian LNG inventories?

Waddell: There were a few cancellations in the fall, but there were also still hurricane effects on the Gulf Coast. That wasn’t built into what we were expecting. For example, Cameron LNG was offline for weeks, and along with cancellations, that contributed slightly to this shortage. But those issues weren’t major contributing factors. Buyers could still get cargoes elsewhere at reasonable prices.

NGI: When do you expect the market to rebalance and prices to stop climbing?

Waddell: The cold has been a game changer in terms of tightening up the market. We’ve also seen ongoing weld quality issues at the Gorgon LNG terminal in Australia. The issues that impacted Train 2 last summer have been found on Train 1. Given that it took about six months to get Train 2 back into operation, that’s another lengthy potential outage in the Pacific Basin.

This cold is rapidly depleting LNG inventories, and there will be a lot of restocking demand in Asia to make sure they can fulfill supply obligations toward the end of the first quarter. It does look like the current market will be sustained for a bit longer than we were expecting last month. For the March delivery contracts on JKM, there is obviously time to get more supply out of the Atlantic Basin and prices seem to reflect that right now. Then of course you get into the spring shoulder season. While there is restocking demand in the region, there’s not that much Asian storage and demand is typically lower. So the shoulder season in Asia is really when this thing should be knocked on the head.

NGI: How has the Asian market influenced prices and natural gas inventories in Europe?

Waddell: Because Europe was sitting so comfortably on storage supply heading into the winter, there really hasn’t been that much supply competition between Europe and Asia. But what we’ve started to see over the last couple weeks is some tightness beginning to manifest in the European market, in addition to some of the supply disruptions like the Hammerfest LNG terminal in Norway catching fire late last year. Russian supply has underperformed expectations too, particularly at the start of this year. There has also recently been quite a major Algerian supply disruption for southern Europe, and it’s there we most acutely see this competition with Asia emerging. The Spanish Punto Virtual de Balance (PVB) market is now basically outbidding the JKM for late 1Q2021 supply. But across Europe, with the amount of natural gas storage that’s being drawn down, we are seeing some tightness.

NGI: Should we expect more seasonality in the LNG market going forward, with price spikes in the winter and cancellations in the summer, as demand grows and more production comes online?

Waddell: There’s definitely a space for more volatility being driven by the Chinese market. It is one of the major growth markets for the next few years. The number of households and the amount of heat sensitivity in that market relative to the peak shaving and storage capacity is driving up the volatility there compared to what we’ve seen previously. Hundreds of billions of cubic meters of annual demand is expected to be added by the middle of the decade in the Chinese market, and unless storage is able to keep pace, it won’t be able to soothe demand there. The threat of volatility is definitely there.

James Waddell joined Energy Aspects in 2019 as a Senior Global Gas Analyst. He previously worked as a journalist for the trade press covering LNG and European natural gas markets in London. Waddell has covered the energy industry for nearly a decade, including work in Norway, Russia and Indonesia.

Shoulder season may be setting in across U.S. natural gas forward markets weeks ahead of schedule, with modest price changes seen across the country, according to NGI’s Forward Look.  A quick return to business as usual following last month’s historic winter freeze combined with near-perfect temperatures to drive April forward prices up only 6.0 cents…