Houston-based Shell Offshore Inc. on Tuesday disclosed a “significant discovery” at the deepwater Leopard prospect in the Perdido Corridor of the Gulf of Mexico (GOM). 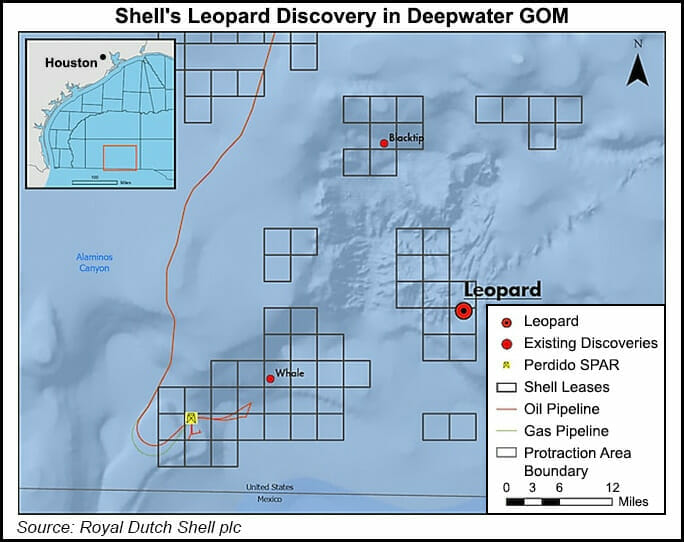 Leopard is operated by Shell and owned 50-50 with Chevron U.S.A. Inc.

“Leopard expands our leading position in the Gulf of Mexico and is an exciting addition to our core portfolio, especially given its proximity to existing infrastructure and other discoveries in the Perdido Corridor,” said Executive Vice President Paul Goodfellow. He oversees the Deepwater division.

Leopard could boost output from Perdido, where Shell’s Great White, Silvertip and Tobago fields already are producing. Shell’s Whale discovery, also in the Perdido, is progressing toward a final investment decision sometime this year.

Leopard, about 245 miles south-southeast of Houston, is close to 20 miles east of Whale, 20 miles south of the recently appraised Blacktip discovery, and 33 miles from the Perdido host.

[Wondering what the price of U.S. LNG is? Check out NGI’s Gulf Coast Netback pricing.]

Shell currently operates nine deepwater production hubs, numerous subsea production systems and has one of the largest contracted drilling rig fleets in the GOM. It also is the largest leaseholder in U.S. waters.

Shell began producing from a spar in the Perdido in 2010. When the Perdido platform was launched 11 years ago, it was able to produce annual peak production of more than 200 MMcf/d of natural gas and 100,000 b/d of oil.

Shell’s U.S. GOM production has low greenhouse gas (GHG) intensity, another reason the discovery is considered a key project going forward. The energy major has committed to becoming a net-zero oil and gas producer by 2050.

“With our U.S. Gulf of Mexico production among the lowest GHG intensity in the world, Shell remains confident about the GOM and this latest discovery will help us deliver on our strategy to focus on valuable, high margin barrels as we sustain material Upstream cash flows into the 2030s,” he said.

Goodfellow’s reference to Shell’s U.S. GOM production being among the lowest GHG intensity in the world is a comparison among other members of the International Association of Oil & Gas Producers, Shell noted. The global upstream group’s members produce an estimated 40% of the world’s oil and gas, and they operate in all producing regions.

In a recent presentation, Wood Mackenzie’s Ed Crooks, vice chairman for the Americas, said deepwater GOM and Saudi Arabia are the two least emissions-intensive sources of oil consumed in the United States.