A committee created earlier this year to advise the Pennsylvania Department of Environmental Protection (DEP) on its regulation of the state’s conventional oil and gas drillers said it won’t support a package of rules for the industry that are expected to be implemented next year. 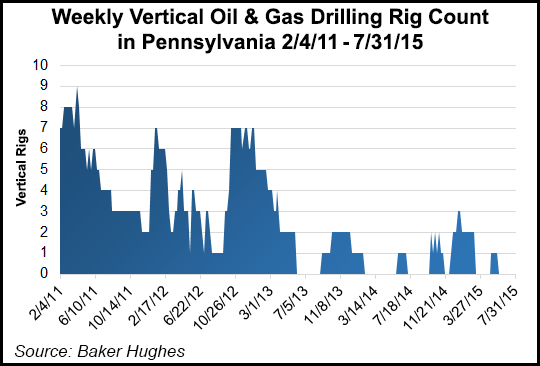 In a letter sent to DEP Deputy Secretary Scott Perry last month, the Conventional Oil and Gas Advisory Committee’s (COGAC) five voting members called the proposed rules “unnecessary and inappropriate.” The members, all of whom work in the state’s conventional industry, also questioned the DEP rulemaking process and said the agency ignored its statutory obligations by neglecting the industry’s concerns and failing to provide substantial reasons for the series of proposed environmental regulations. The rules are expected to be presented in a final draft at the committee’s next meeting later this month.

“The voting members of COGAC met on June 18, 2015 to discuss the current status of the Chapter 78 regulatory process and concluded that we are in full agreement that the vast majority of the proposed changes are unnecessary and inappropriate, and the process for promulgating the rule for conventional oil and gas wells is fundamentally flawed and cannot be cured,” the members said in their letter.

Moreover, some of those vertical rigs in recent years may have been used to test unconventional formations, or perhaps to hold acreage with production, rather than to develop conventional fields.

The DEP has been working to update oil and gas industry regulations since 2011. But in 2012, the state’s omnibus energy law, Act 13, was passed (see Shale Daily, Feb. 15, 2012). It required the department to significantly revise oil and gas laws. Last year, the general assembly passed Act 126, requiring the agency to craft separate regulations for the conventional and unconventional oil and gas industries, which it did by separating the proposed rulemaking into two chapters (see Shale Daily, June 27, 2014). Chapter 78 addresses conventional well development, while Chapter 78a addresses unconventional well development.

The DEP has been criticized for delays in rolling out both sets of rules. Tens of thousands of public comments, the legislation of recent years and a new administration with Democratic Gov. Tom Wolf taking office in January have all delayed the process (see Shale Daily, May 13, 2014). In March, Wolf’s appointee for DEP Secretary, John Quigley, said some of the new regulations would be tighter and geared toward addressing the concerns of operators, landowners and the general public (see Shale Daily, March 9).

Quigley said the agency has been diligent in crafting its proposals.

“DEP has undertaken an unprecedented public process in developing this rulemaking,” he said. “Tens of thousands of Pennsylvanians approached this process constructively, submitting comments and being heard at listening sessions. COGAC’s opposition will not hinder the progress of the final rule, and I hope when they meet in August that they are prepared to engage with us as we finalize the rule.”

The rule changes have always dealt with reducing impacts on public resources, preventing spills, waste management and restoring well sites. But under Quigley’s leadership, the DEP is now proposing to eliminate the use of temporary waste storage pits, which are primarily used by conventional drillers. It’s also calling for centralized wastewater impoundments to either close within three years of the new rules’ implementation, or be upgraded and re-permitted. The proposal is also seeking noise abatement requirements and additional consideration for drilling near waterways and locating orphaned, abandoned and active wells, among other things.

While the state’s leading conventional and unconventional trade groups have blasted the proposals, calling them onerous in comparison to the regulations of other industries, conventional drilling representatives have called the process a work-crossing exercise that has produced two identical sets of regulations for very different industries (see Shale Daily, April 30;April 14).

In its letter, COGAC said DEP ignored “voluminous comments” from the regulated industry and trade groups “that expressed serious concerns with many detailed aspects of the proposed rules as they would affect conventional oil and gas operations.” It also said the agency failed to comply with rulemaking standards under the state’s Regulatory Review Act by not providing “evidence along with supportive data that would demonstrate there is a compelling need for sweeping revisions to the regulations” for legacy drillers.

Meanwhile, Republican legislators have tried to push the DEP to start over with regulations for the conventional industry in letters to the DEP and failed amendments during this year’s budget negotiations (see Shale Daily, June 30).