The fourth iteration of the Pennsylvania Department of Environmental Protection’s (DEP) biannual production report issued last week indicated that natural gas production from unconventional wells totaled 894.8 Bcf during the first six months of this year, a figure that includes Marcellus Shale wells along with some targeting the Utica Shale and other formations. Operators also reported producing 672,550 bbl of condensate and 49,194 bbl of oil from January through June. 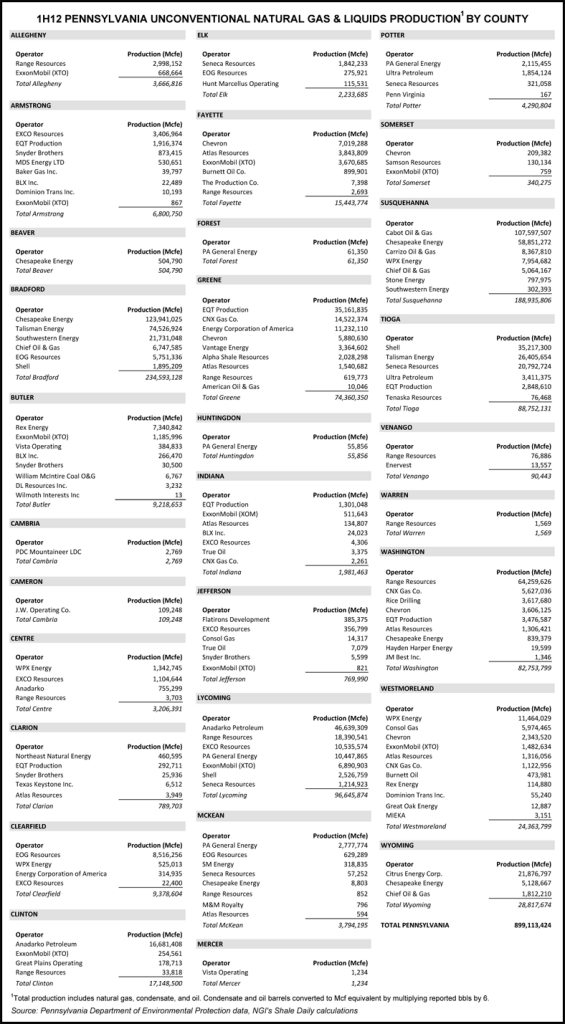 The data showed that a Chesapeake Energy Corp. subsidiary was atop the list in terms of production and wells permitted, and Bradford County remained the locality to host the most production. The DEP listed 8,673 permitted wells in the latest production report, but only 2,874 (33.1%) recorded any production.

The DEP said the top producing well in the state was Citrus Energy Corp.’s Johnston 1H well in Wyoming County’s Meshoppen Township, which produced 4.54 Bcf. Citrus also had the second-most productive well, Lasco 2H in Meshoppen, which produced 2.88 Bcf. As a point of interest, Citrus and Cabot Oil & Gas Corp. together had the top 27 wells in terms of production, all in Wyoming and Susquehanna counties, respectively.

The DEP had been scrambling recently to publish a complete 1H2012 report, due to a series of technical glitches. Last Tuesday the DEP blamed Chesapeake for submitting data that violated database rules, causing the largest producing company in the state to be temporarily excluded from the report. Reporting errors by Talisman and SWEPI kept those companies off the report on Tuesday and Thursday, respectively (see Shale Daily, Aug. 24; Aug. 22).

The DEP’s Office of Oil and Gas Management has annual oil and gas production reports dating back to 2000 available for download from its website. The first Marcellus-only report covered a 12-month period from July 2009 to June 2010. Subsequently, the DEP released Marcellus-only reports that covered three six-month periods: July-December 2010, July-December 2011 and January-June 2011.

However, the fourth six-month report, which covers January-June 2012, includes all unconventional wells and is not broken down by shale/tight gas and oil plays. The DEP said the change was mandated by Act 13, the state’s omnibus Marcellus Shale law (see related story). Accordingly, the latest biannual report includes about 40 wells targeting the Utica Shale.