Pennsylvania’s leading oil and gas trade groups are voicing strong opposition to Gov.-Elect Tom Wolf’s severance tax proposal, ruling out any sort of compromise. They say an extraction tax would cut Marcellus Shale development and threaten the jobs and economic opportunities it has created. 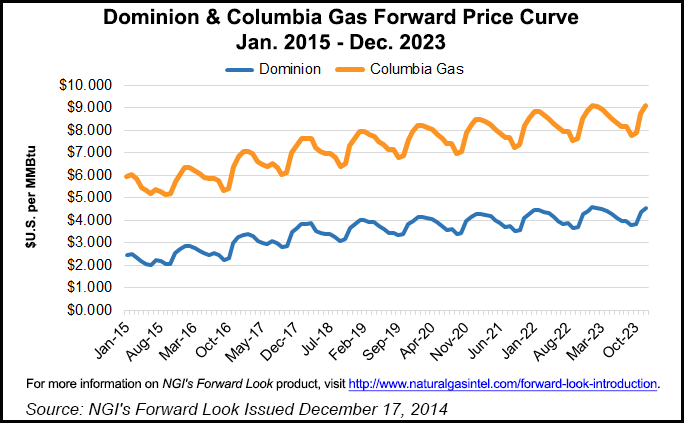 Wolf, a Democrat who campaigned to tax the state’s oil and gas drillers at a rate of 5%, has said a new tax could generate up to $1 billion, which may be needed as the Independent Fiscal Office has projected a 2015 budget deficit of nearly $2 billion (see Shale Daily, Nov. 5; Oct. 31). The Marcellus Shale Coalition (MSC), the Pennsylvania Independent Oil and Gas Association (PIOGA) and the Associated Petroleum Industries of Pennsylvania (APIP) came out against the proposed tax during a conference call on Tuesday, as Wolf puts a transition team together and prepares to unveil his first budget proposal in March.

“Priority No. 1 for Gov.-elect Wolf should be encouraging even more energy-driven economic growth. His proposal for a new severance tax threatens to stifle energy production and the jobs that go with it,” said APIP Executive Director Stephanie Catarino Wissman. “Policymakers need to get the details right, people’s jobs and quality of life are at stake if they don’t.

“Gov.-elect Wolf ran on this issue of a severance tax and taxing the industry. This was a question focused on revenue, how much revenue can we get out of this industry? What we would like to do is turn the focus on what this is going to mean for the economy. What is this going to mean for the revenue that the government is — right now — receiving from this industry, what is it going to do to jobs? That’s the debate, that’s the discussion we need to have going forward.”

Participants on Tuesday’s call noted that the current commodity price environment is already creating uncertainty for operators in the Appalachian Basin. The possibility of a severance tax, they said, is only compounding that uncertainty and if passed, it could lead to a competitive disadvantage that wouldn’t find operators leaving the Marcellus altogether, but instead developing less of the field, which they claim could lead to job losses and less opportunity for the state’s economy.

It also remains unclear if Wolf plans to put forward a proposal that would replace the state’s current impact fee, or combine the two. Passed in 2012, the impact fee charges a flat rate for all the wells drilled, which is distributed to local communities and state agencies (see Shale Daily, Feb. 15, 2012). Since it was enacted, more than $630 million has been generated, in addition to the $2.1 billion that operators have paid in other fees, including the state’s corporate tax (see Shale Daily, April 4).

The trade groups also said Wolf’s idea that a 5% severance tax could generate up to $1 billion is unfounded.

“The revenue projections that were out there during campaign season have been wildly overestimated, they’re certainly not supported by the facts,” said MSC President David Spigelmyer.

Critics of Wolf’s plan have said that gas would have to be priced at about $6.00/Mcf to generate that kind of revenue. For now, the groups said that figure is inconceivable for the Appalachian Basin, as constrained infrastructure and abundant supplies have found gas in the region consistently priced at about $2.00 less than the benchmark Henry Hub price.

When asked if they might be willing to reach any sort of compromise, considering the state faces a steep budget deficit and lawmakers have debated a severance tax since at least 2007 (see Shale Daily, Jan. 28), the trade groups said no and added that the industry already pays its fair share when the impact fee and Pennsylvania’s 10% corporate tax rate — among one of the highest in the country — is considered.

When asked about the possibility of calculating the tax based on hubs closer to home, such as Dominion or Transcontinental Gas Pipe Line (Transco) zones, or the possibility of a volumetric tax rather than one based on the wellhead price, Spigelmyer said those would still be severance taxes.

“The one thing that’s very clear, whatever pricing point you want to select, I think we’re looking at the wrong object here,” he said. “Frankly, we need to look at the opportunities and the potential for lost opportunity by simply selecting a pricing point and adopting a tax formula going forward.”

According to the Pennsylvania Department of Labor and Industry, the average wage in core Marcellus Industries, such as well site development, extraction and pipeline operations, was about $93,000 in October, or $43,400 more than the average wage for all industries in the state. Both core and noncore Marcellus industries have created nearly 230,000 jobs as well, according to state data. Spigelmyer said another tax on the industry could mean less development, which would threaten taxes generated from the supply chain and new jobs.

The debate over a severance tax is once again heating up in the state. Pension reform, liquor privatization and an oil and gas severance tax have been identified as the leading ways to fill the state’s budget gap. A Republican-controlled legislature will present a challenge for Wolf’s proposal, but the party also wants to privatized the state’s publicly-owned liquor stores and pundits said a compromise on that issue could be one way to get a severance tax through.

On Tuesday, Democratic state Sen. Jim Brewster announced a plan to introduce legislation to earmark revenue from a new severance tax for the state’s underfunded public schools, while retaining the impact fee. Under the plan, shale drillers would be able to credit current impact fee expenses against their severance tax liability. That way, Brewster said, the effective rate would be 5% and keep the industry competitive.

“We hear this all the time. Many legislators that you hear on the political side talking about this have no clue how these severance taxes work,” said PIOGA President Lou D’Amico. “Many of these states give credits that exclude vertical drillers. Most of them also have recovery periods for what they consider high cost wells, all fields today would be considered under that. There is no state, to my knowledge, that has a flat 5% tax with no deductions.”