After months of deliberation and public hearings, a western Pennsylvania township zoning board rejected an appeal from two environmental organizations and four local residents to stop Rex Energy Corp. from proceeding with a five-well pad near a school. 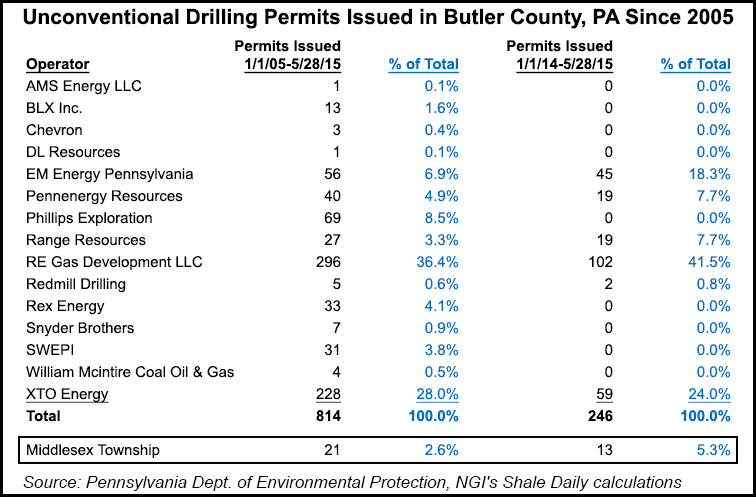 Middlesex Township’s decision to uphold a zoning ordinance that allows oil and gas drilling in residential-agricultural zones throughout most of the community could now set in motion a court battle with broader implications for other municipalities facing similar challenges across the state. Attorney Jordan Yeager, who represents the environmental groups and residents that challenged the zoning ordinance, reportedly called the ruling “the first inning” and said he would appeal it.

In October, two organizations from the other side of the state, along with four Middlesex residents, filed a challenge against the township’s zoning board for modifying an ordinance that allows oil and gas companies to drill in residential-agricultural zones (see Shale Daily, Oct. 13, 2014). The appeal came after staunch opposition from a local parents group that was formed to research horizontal hydraulic fracturing (fracking) and resist Rex’s plans to drill less than a mile from the local school district’s property (see Shale Daily, Sept. 18, 2014).

The group also filed an appeal with the state Environmental Hearing Board against permits issued for the site by the Pennsylvania Department of Environmental Protection (DEP), which has said it found no reason to deny Rex Energy the permits. Middlesex officials said it was merely their role to determine if the township’s zoning ordinances were valid.

“The board heard hours of testimony and came to this conclusion based on the facts presented to them over the course of a few months,” said Rex Energy Regional Vice President Michael Endler. “We are pleased with the outcome and plan to promptly resume our well development…”

The company had been forced to suspend its operations at the site pending the zoning board’s decision (see Shale Daily, Nov. 20, 2014; Nov. 12, 2014). Endler said the company is planning to retest area groundwater sources in the coming days. It will then move on to site preparation work and begin constructing sound abatement walls.

Once those steps are complete, he said, the company will set the conductor casing for the wells. It also plans to continue providing operational updates to the nearby school district, where more than 3,200 students in grades K-12 attend school.

Several townships across the state are facing similar challenges to drilling permits issued under local residential-agricultural zoning ordinances (see Shale Daily, Dec. 1, 2014). In most of the cases, opponents are claiming that those zones are not suitable for unconventional well sites. Challengers are claiming that natural gas development in the areas threatens public safety and the legal rights afforded to residents under an environmental amendment included in the state’s constitution.

In 2013, the Pennsylvania Supreme Court struck down parts of the state’s omnibus energy law Act 13 (see Shale Daily, Dec. 20, 2013). It returned to municipalities their right to change or enforce local zoning laws. But the ruling hinged largely on a reading of Article I, Section 27 in the state’s constitution, which says residents have a right to “clean air, pure water and the preservation of the natural scenic, historic and esthetic values of the environment.”

At the time the ruling was issued, sources said it could open the floodgates for further litigation against the oil and gas industry (see Shale Daily, Jan. 6, 2014; Dec. 27, 2014). Opponents of drilling in residential-agricultural zones instead believe wells should be developed in industrial zones, where very little drilling has occurred in the state.

A majority of the residents in Middlesex have oil and gas leases. Hearings on the zoning challenge attracted hundreds of people. According to state records, more than 800 unconventional drilling permits have been issued in Butler County since 2005. Rex Energy hasn’t been issued a new unconventional drilling permit in the county since April 29, 2011, according to DEP data.

A total of 21 unconventional permits have been issued in Middlesex Township since 2005, 13 of them coming since the beginning of 2014.

All of the Middlesex zoning board members were initially forced to abstain from voting on the appeal because they also have oil and gas leases, but had to proceed without a majority. Yeager cited a conflict of interest in discussing his plans for filing an appeal.