Unconventional natural gas well drilling permits in Pennsylvania hit an eight year-low in 2016, according to the state Department of Environmental Protection’s (DEP) annual oil and gas report, reflecting what’s viewed as the bottom of the 2014 commodities downturn for Appalachian shale operators. 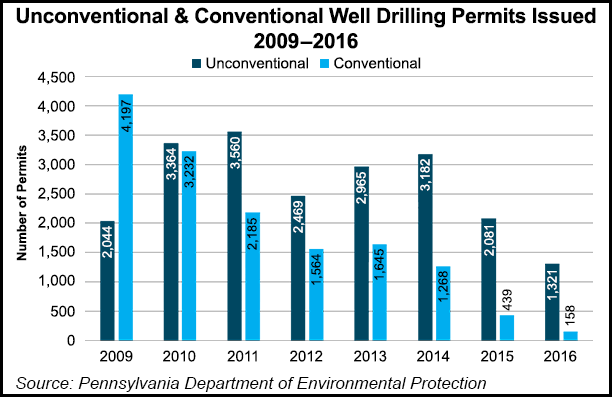 “There does seem to be a spirit of renewed interest and excitement by many industry players, and you’re starting to see that in some of their permitting activities, and certainly in their drilling schedules,” said Thomas Murphy, director of Pennsylvania State University’s Marcellus Center for Outreach and Research, when asked if permitting numbers are likely to bounce back this year.

Murphy said, however, that the trend toward more drilling permits is increasing across the country. In Pennsylvania, spot prices are up compared to recent years, more pipeline capacity is coming online that will have to be filled and some sectors, particularly power generation, are utilizing more natural gas. Add to that the prospect of increasing liquefied natural gas exports, plans for increased capital spending and more rigs running.

“All those would add up to the likeliness of increased permitting going forward,” Murphy added. “You are seeing new rig activity within the state; there’s no question that there’s more activity on the ground throughout the state as a whole.” As of Friday, there were 35 rigs running in Pennsylvania, up from 16 at the same time last year. More rigs are also running in Ohio and West Virginia, according to Baker Hughes Inc.

Pennsylvania shale gas production increased 11% year/year to 5.1 Tcf in 2016, despite the fact that the number of new unconventional wells drilled hit the lowest point since 2008 at 503. Shale producers relied heavily on a deep backlog of drilled but uncompleted wells to grow production during a year in which it fell across the Lower 48 for the first time since 2005.

The U.S. Energy Information Administration expects a modest reversal this year, projecting that both Lower 48 crude oil and natural gas production will rise this year and even more in 2018 as commodity prices firm.

DEP published its 2016 report in an electronic format that uses a new platform for the first time. It includes interactive data on permit activity, inspections, operator compliance and enforcement for both the conventional and unconventional industries. The agency has been working for years to implement modern technologies that can help make the regulatory process both more efficient and transparent.

Compliance inspections again increased last year to 35,556 for both conventional and unconventional operators. Inspections have increased significantly since 2010, spiking noticeably from 26,940 in 2014 to 34,604 in 2015, when the agency launched an initiative to conduct more administrative and well site inspections.At the time,DEP aimed for more enforcement and outreach to operators in both industries that failed to submit prior year production data and annual well integrity reports as required by law.

An increase in inspections led to more violations being issued in 2016. For unconventional operators, they increased from 404 in 2015 to 456 last year. Since 2009, the DEP said it has collected roughly $31.2 million in noncompliance fines and penalties. Those funds are used to pay for the agency’s oil and gas regulatory programs.

More than a quarter of the eight-year total was collected last year, or about $9.7 million. DEP said, however, that $8.4 million of last year’s fines resulted from just nine violations.

“Our industry’s commitment to operational excellence, including environmental and community safety, is reflected in this new data,” said Marcellus Shale Coalition President David Spigelmyer of the agency’s annual report. “While drilling activity levels have fallen due to market conditions, regulatory compliance along with DEP inspections, are near all-time highs.”