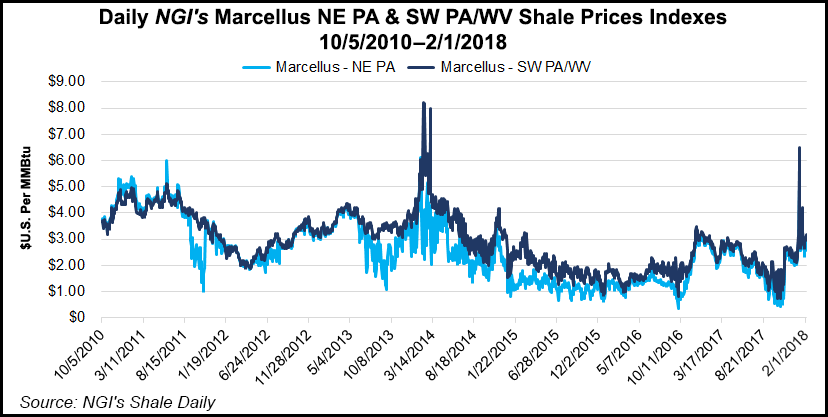 The IFO expects impact fee collections for 2017 to be $219.4 million, or $46.1 million higher than the $173.3 million producers paid in 2016. Companies are required to self-report annually and submit fees by April 1 for the prior year to the Pennsylvania Public Utility Commission.

While the IFO’s latest estimate released on Wednesday is slightly lower than the $49 million increase it forecasted last July, more new wells came online and benchmark prices crept above $3.00/MMBtu last year, which pushed the fee schedule higher. The New York Mercantile Exchange average was $3.108/MMcf in 2017, the IFO said.

The fee is levied annually on all unconventional wells in the state during their first 15 years of operation, as long as they produce more than 90 Mcf. It is not a volumetric fee, but rather one calculated using a multi-year schedule based on the average annual price of natural gas. The fee schedule, and the amount companies must pay for each well, depends on the number of years the wells have produced. Fees are highest for wells in their first operating year.

IFO said 812 new wells came online last year, compared with 504 in 2016, which was the third straight year of impact fee declines as commodity prices and drilling activity declined. There were 8,634 unconventional wells that were subject to the impact fee in 2017.

Higher prices are likely to provide a $43.4 million boost, while more new wells should result in additional fees of $2.7 million, the IFO said.

Annual collections are announced after the April collection date. They are distributed to local governments and state agencies to provide for infrastructure, emergency services, environmental initiatives and other programs.