Pennsylvania Gov. Tom Wolf’s latest proposal to implement a severance tax on natural gas production could generate more than $200 million annually in revenue over the next five years, according to an analysis of the 2018-2019 executive budget by the state’s Independent Fiscal Office (IFO). 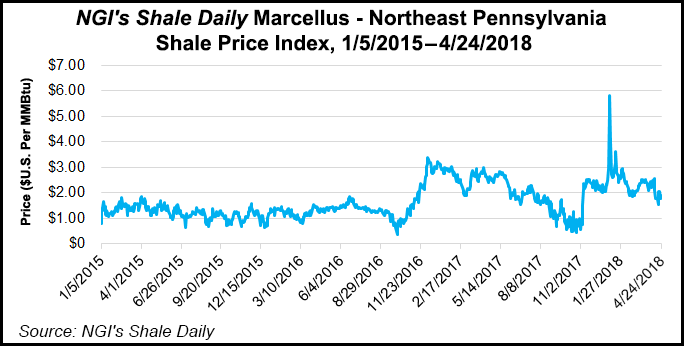 However, any boost the tax gives to the state’s general fund would be offset by the administration’s proposal to phase-in a reduction of the corporate net income tax (CNIT).

Wolf, a Democrat, has proposed a severance tax every year since taking office in 2015. The budget unveiled in February would establish a volumetric severance tax that would rise and fall with gas prices. Under the proposal, producers would pay about 4-7 cents/Mcf based on a price range of below $3.00/Mcf to more than $6.00/Mcf. Wolf’s budget would increase spending by 3.1% from current levels, and includes no other broad-based tax increases, relying solely on a severance tax to fully fund investments.

When the budget was released, the administration estimated that the tax would raise $250 million. The IFO analysis released this month assumes a gas price of less than $3 and about 5 Tcf of natural gas production for fiscal year (FY) 2018-2019, when the severance tax would generate $210 million. The IFO’s analysis assumes gas prices rise above $3 by FY2022-2023 and production increases to 7.9 Tcf, at which point revenue from the tax would increase to $420 million.

But by FY2022-2023, the analysis projects that both the severance tax and CNIT proposals would together generate $305 million in revenue. New revenues peak in FY2019-2020 at $571 million, the IFO said, but then begin to decline after that because of the phase-in of a CNIT reduction.

Wolf’s plan would also retain the state’s existing impact fee, which is levied on all unconventional wells during their first 15 years of operation. Unlike last year’s proposal, Wolf’s latest does not allow an impact fee credit or deduction to be taken against the severance tax.

If Wolf’s plan were to pass the legislature, the proposed tax would be effective on July 1, with the first payment due June 15, 2019. Last year, Wolf proposed a 6.5% severance tax. Such proposals, along with his calls for other tax increases and Republicans’ unwillingness to support them, have led to partisan fights and budget impasses in recent years.

Wolf faces reelection this year. Three Republican candidates are currently vying in a primary to challenge him in the general election.