The Pennsylvania Public Utility Commission (PUC) has rejected a ruling by two administrative law judges (ALJ) that it should dismiss a petition by Sunoco Logistics Partners LP to be a public utility for the Mariner East pipeline. The PUC ordered more public hearings on the issue. 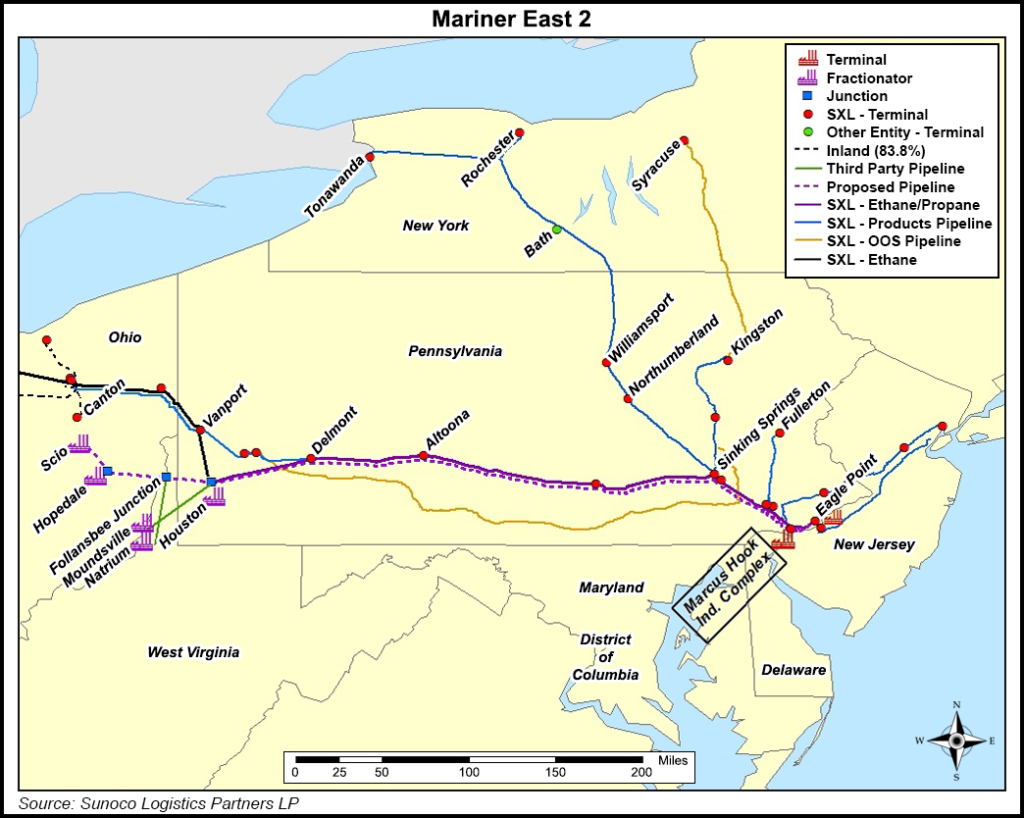 In a 4-1 vote Thursday, the PUC approved a motion to reverse the ALJ ruling issued on July 23 (see Shale Daily, Aug. 1) and remanded the issue to the ALJ office for further proceedings. The commission also rejected all preliminary objections to Sunoco’s request for a zoning exemption to Section 619 of the state’s Municipalities Planning Code (MPC).

The authors of the motion, Vice Chairman John Coleman Jr. and Commissioner Pamela Witmer, added that there were “numerous and serious misconceptions” about Sunoco’s regulated history with the PUC and the specific issues surrounding the company’s request for the zoning exemption.

“In this proceeding, the commission has been asked to decide a very narrow question: whether enclosures (walls and a roof) that are built around and over a valve control or pump station should be exempt from municipal zoning regulation,” Coleman and Witmer said. “To answer this question, we must decide whether it is in the convenience or welfare of the public for Sunoco to enclose the planned facilities with walls and roofs, even if those enclosures may conflict with local zoning ordinances.”

In a separate statement Thursday, the PUC added that “if the structures are ‘buildings’ then the issue becomes whether the ‘buildings’ are reasonably necessary for the convenience or welfare of the public, meaning they are exempt from local zoning ordinances under the MPC.”

Sunoco filed its petition to become a public utility in March, after several municipalities along the pipeline’s route voiced objections to the proposal — specifically with rights-of-way for the pipeline and the construction of 17 valve stations and 18 pumping stations (see Shale Daily, April 28). Thursday’s motion cited the opposition of West Goshen Township, in Chester County. Some environmental groups also oppose Sunoco’s request, arguing that the company does not meet the criteria for being a public utility (see Shale Daily, June 11).

Most of the Mariner East pipeline has already been built. Sunoco wants to expand the line, in two phases, into Ohio and southwest Pennsylvania to gather natural gas liquids (NGL) and transport them to its Marcus Hook facility in Delaware County, south of Philadelphia (see Shale Daily, Sept. 9, 2013).

According to Sunoco, the first phase of Mariner East is projected to have an initial capacity of 70,000 b/d of NGLs and was expected to move propane by 2H2014 (see Shale Daily, Sept. 9, 2013). The second phase would transport NGLs from processing facilities in western Pennsylvania, eastern Ohio and West Virginia to Marcus Hook by 4Q2016 (see Shale Daily, Dec. 5, 2013).

The PUC motion adds that Sunoco is a product of several mergers and acquisitions between two pipeline companies — Susquehanna Pipe Line Co. and Keystone Pipe Line Co. — dating back to the 1930s, when the PUC’s predecessor, the Pennsylvania Public Service Commission, held regulatory authority.

“The pipeline routes and services described in this proceeding have been certified as public utilities by this commission (and its predecessors) since the early 1930s,” the motion said, later adding that Sunoco “is certified in Pennsylvania as a public utility to transport petroleum/refined petroleum products, including propane, from Delmont, PA, to Twin Oaks, PA.”

Sunoco Logistics spokesman Jeff Shields told NGI’s Shale Daily that Thursday’s decision by the PUC “validates Sunoco Pipeline’s existing status as a public utility corporation for the transportation of petroleum products within Pennsylvania. It also recognizes that the Mariner East project will deliver real benefits to Pennsylvania residents by providing a more reliable energy supply using the state’s own natural resources from the Marcellus Shale.”

Sunoco Logistics CEO Michael Hennigan concurred. “We are pleased that the PUC has confirmed that we are a public utility corporation in Pennsylvania as we have maintained, and recognized that Mariner East will provide a critical service,” he said. “We will continue to work cooperatively with all municipalities as we try to do for all of our projects.”

PUC Commissioner James Cawley was the lone dissenting vote on the motion.

“The majority may be correct that a [Section 619 of the MPC] proceeding is properly confined to three narrow issues, but given the importance of the issues raised in the objections and the number of people possibly adversely affected and local zoning ordinances and comprehensive plans preempted, it is prudent to give a full airing to the objections raised using accepted and longstanding administrative procedures,” Cawley said. “I fully understand that doing so will require additional time, but I think we owe it to the people affected to take that time.”