Regulators in Pennsylvania have approved a long-term infrastructure improvement plan (LTIIP) that lays the groundwork for UGI Utilities’ Gas Division to replace its cast iron mains within 14 years and its bare steel mains within 30 years. 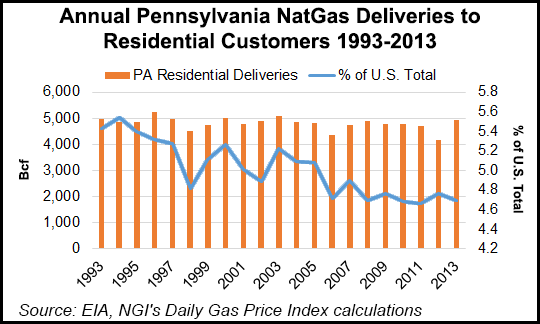 In a unanimous vote Wednesday, the Pennsylvania Public Utility Commission (PUC) approved UGI’s LTIIP, which requires the company to replace gas service lines on a planned basis in conjunction with the replacement of the mains to which they are connected.

UGI told the regulators that it has already accelerated capital investment in infrastructure replacement as a result of commitments it made in a 2012 settlement agreement regarding a natural gas explosion in 2011 that killed five people in Allentown, PA (see Daily GPI, Feb. 11, 2011). Last year the PUC approved a revised settlement raising to $500,000 the penalty on UGI Corp. for the incident (see Daily GPI, Jan. 25, 2013).

Under the revised settlement, UGI is barred from recovering the charge for the costs of its replacement system for two years. The settlement calls for the utility to replace all cast iron natural gas pipelines over a 14-year period and bare steel over a 30-year period; enhance its odorant testing program; and install fixed odorant level monitoring equipment at all third-party points of delivery into UGI’s pipeline system and fixed odorizers at gate stations serving Allentown, Lancaster, Reading, Harrisburg and some other population centers in its service territory.

In a complaint filed against UGI in 2012, the PUC’s Bureau of Investigation and Enforcement (I&E) alleged that the company failed to promptly and effectively respond to the gas leak and explosion; had insufficient levels of natural gas odorant in its distribution system; failed to comply with regulations for its gas odorant testing program; and failed to adequately and timely respond to “warning signs” regarding the integrity of its cast iron mains (see Daily GPI, July 9, 2012). The source of the gas that led to the explosion was a 12-inch diameter cast-iron main with a circumferential crack that had been installed in 1928, according to the I&E complaint.

“One of the main criteria that the commission must use in judging the adequacy of an LTIIP is whether the plan accelerates the replacement of aging infrastructure,” said PUC Chairman Robert F. Powelson. “A thorough review of UGI’s LTIIP shows that proposed replacement schedule maintains the level set forth in the settlement and is an acceleration over their historic replacement schedule. As such, I believe that approval of the LTIIP is warranted.”

UGI expects to pay $51.2 million each year of the LTIIP from 2014 through 2018 to cover cast iron and bare steel main replacement and service line replacements. The timeline to replace the mains is backdate to begin March 2013.

The volume of gas delivered to residential customers in Pennsylvania has been fairly stable since 1993, but the state continues to account for a smaller percentage of overall U.S. natural gas consumption. The Commonwealth accounted for 5.4% of total U.S. residential deliveries in 1993, but that figure has ranged from 4.7%-4.8% every year between 2008 and 2013.