Pennsylvania natural gas producers may be pulling back to focus on higher-margin targets, but their wells appear to have not gotten the message. Gas output in the commonwealth broke another record for the first half of 2014 (1H2014), topping out at just under 2 Tcf. 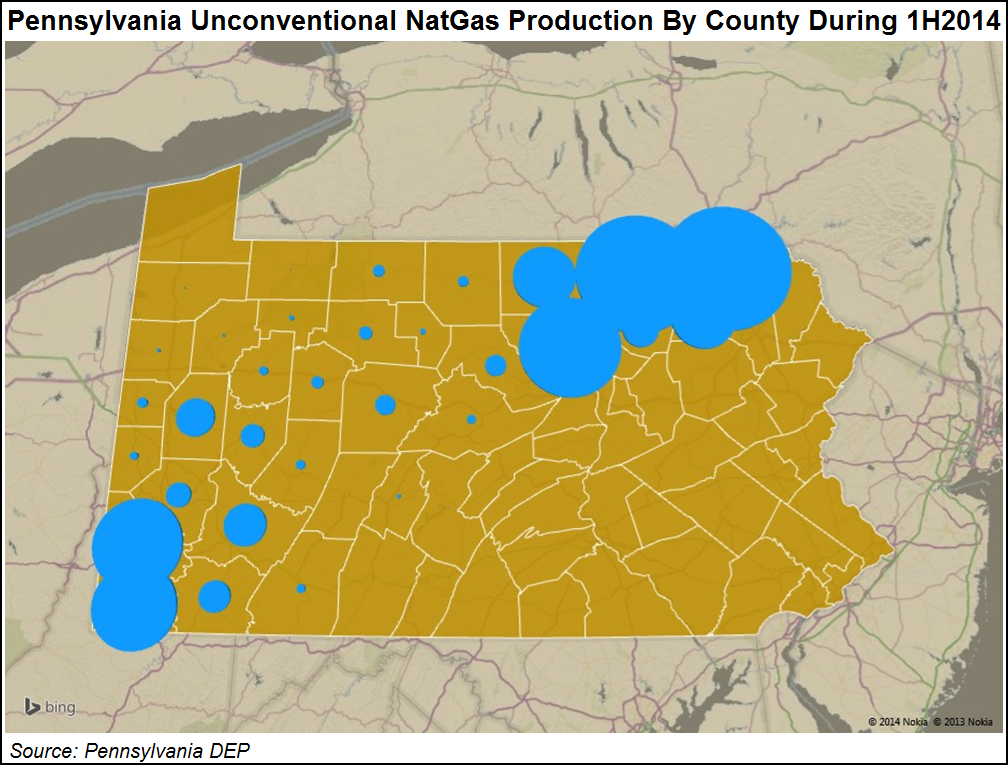 The Department of Environmental Protection (DEP) issued the latest numbers late Monday, indicating total output between January and June was 1.94 Tcf, about 520 MMcf higher than in the year-ago period.

Chesapeake Energy Corp. was reported to be far and away the leading gas operator in the state after it produced 3.99 Bcf, easily surpassing any other company. The top five gas producers accounted for almost half of the state’s gas supply in 1H2014 and were, in order, Chesapeake, Cabot Oil & Gas Corp., Range Resources Corp., Southwestern Energy Co. and EQT Corp.

The six-month figures “typically are updated as operators update their production reports due to reporting errors that may include missing wells, incorrect data and in some cases there are operators who have not submitted their data prior to DEP releasing the data,” said Pennsylvania State University’s Matt Henderson, shale gas asset manager for the Marcellus Center for Outreach and Research.

“When looking at production on a per-well basis during the period, Cabot has the top five, and seven of the top-10,” Henderson said. “Chief has the other top three wells.” On a daily average basis, “Cabot has nine of the top-10, and 11 of the top-20 in the Commonwealth. Chief…has seven, and Range and Seneca Resources each had one.

“The top eight wells all averaged over 20 MMcf/d.”

The gas produced in 1H2014 predominately was from the Marcellus Shale, and most were horizontal wells. Horizontal/vertical drilling also targeted the Utica and Upper Devonian formations. As in previous periods, most of the state’s dry gas gains were from southwestern and northeastern Pennsylvania.

Leading the way was Susquehanna County, which reported 456 Bcf in the first six months of this year, followed by Bradford County at 411 Bcf. Lycoming County wells brought in close to 271 Bcf between January and June, while Washington County had close to 198 Bcf total.

Cabot’s big wells all were in Susquehanna County, except for one in Lycoming. Cabot’s top Susquehanna producer (Molnar M1) had 26,680 MMcf/d during the period, followed by Molnar M3 at 26,382 MMcf/d, according to Henderson.

Chesapeake has of late been turning to more oil/liquids targets, but its gassy showing in Pennsylvania might offer a different tale. Although it has been dropping gas rigs to move to oilier targets, northern Marcellus output in Pennsylvania rose 12% in 2Q2014 from a year ago to average 878 MMcfe/d net; it was down 3% sequentially (see Shale Daily, Aug. 6).

Chesapeake, like its peers, could have produced even more gas in the first six months of this year had there been enough infrastructure, according to management. At the end of June, Chesapeake had 120 wells that were awaiting pipeline connection or were in various stages of completion across the region. It was the same story for Cabot, Range and others.

Washington County, in the Greater Pittsburgh area, edged out all others in the state for condensate production with 1.76 million bbl reported. During 1H2014, most of the liquids were produced by Range, with Chesapeake contributing all of the reported oil supplies at 204,316 bbl. Washington County also was the fourth largest dry gas producer in 1H2014 at close to 198 Bcf.

“Some of this production is due to increased activity within other shale formations than the Marcellus,” Henderson said.

Based on DEP and Railroad Commission of Texas (RRC) data, the two states would appear to be contributing slightly more than half of all U.S. onshore production.