Unconventional natural gas production in Pennsylvania reached new heights in 2014, with operators reporting 2.08 Tcf of production in the last six months of the year, according to data released by the state Department of Environmental Protection. 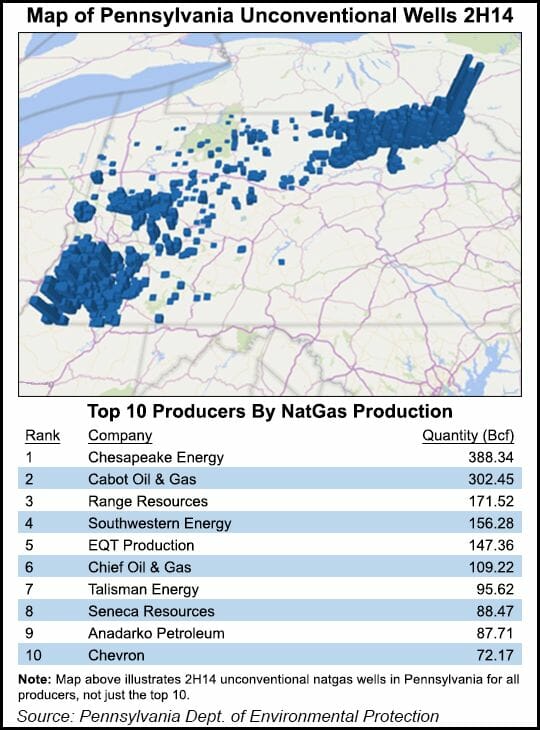 Combined with unconventional production from the first half of the year, shale drillers in the state produced more than 4 Tcf of natural gas in 2014, shattering the 2013 record of 3.3 Tcf when the Marcellus Shale helped propel Pennsylvania to the second-largest gas producing state in the country behind Texas, which reported 6.8 Tcf that year (see Shale Daily, Feb. 20, 2014). Last year’s production was also well above the 2.04 Tcf reported in 2012 (see Shale Daily, March 6, 2013)

Operators reported producing 1.94 Tcf through 1H2014, and little appeared to change among the state’s leading gas producing companies and counties during the last six months.

Chesapeake Energy Corp. was once again the state’s top gas producer, reporting about 388 Bcf from 712 producing wells in 2H2014 (see Shale Daily, Aug. 19, 2014). It was followed by Cabot Oil & Gas Corp., Range Resources Corp., Southwestern Energy Co. and EQT Corp. Susquehanna County in the northeast part of the state was the leading production area, where 478 Bcf was produced during the period, followed by nearby Bradford County, where about 406 Bcf was produced and Washington County in the southwest part of the state, where more than 250 Bcf was produced.

Range Resources Corp. once again produced the most natural gas liquids in the state, reporting nearly 2 million bbl of condensate. It reported 1.7 million bbl in 1H2014.