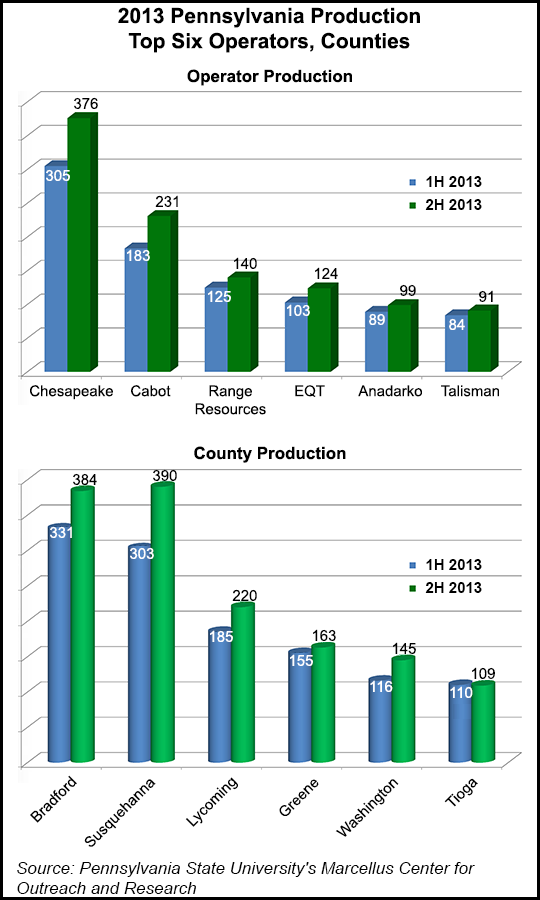 That means Pennsylvania, home of the Marcellus Shale, is now the second largest natural gas producing state in the country, behind Texas, which produced 6.8 Tcf last year. MCOR provided its latest review of the numbers after analyzing the raw production data operators submit to the Pennsylvania Department of Environmental Protection on a six month basis.

Pennsylvania hit a record 2.04 Tcf in 2012 (see Shale Daily, March 6, 2013) and the number climbed higher last year as more wells were connected to pipelines and new pipelines were completed to markets.

“Early on in the play a lot of wells were being drilled. From about 2008 to 2010 there was a ramp-up in the number of wells drilled,” said Matt Henderson, MCOR’s shale gas asset manager. “There were far more wells being drilled than were put online. They are tapping into those wells that were drilled in previous periods and we’re starting to see a decrease in the well inventory.”

The latest data set, derived from production that occurred from July-December 2013, shows that operators produced 1.7 Tcf of natural gas in the last six months of the year, or roughly 283 Bcf more than they did from January-June (see Shale Daily, Aug. 20, 2013).

During the first half of the year, there were 4,200 producing wells in Pennsylvania, Henderson said. By the end of 2013, there were 4,917 producing wells. Another 1,225 wells are currently waiting for pipeline connections and they represent 225 Bcf of untapped gas, according to MCOR’s calculations.

“One reason production increased so much is a lot of new pipeline capacity came online, which allowed a flood of wells to be connected to pipe at the same time,” said Patrick Rau, NGI’s director of strategy and research. “There is still some drilling to hold acreage going on. But the Marcellus is also one of the only dry gas plays that has had returns comparable to oil/liquids plays lately.”

MCOR estimates that Marcellus production could climb even higher in 2014. Officials there project it will reach 3.8-4.5 Tcf by the end of the year.

Susquehanna, Bradford and Lycoming counties in the northeast were the state’s top-three producing counties, followed by Greene and Washington counties in the southwest, which also accounted for most of the 1.6 million bbl of condensate produced in Pennsylvania during the last six months of the year.

Cabot Oil and Gas Corp. owned and operated 15 of the state’s top 20 producing wells during the second-half of the year, as well.

Although Henderson said it should not be interpreted as a type curve for wells in the play, the MCOR estimated that production at some of the state’s best wells between the first half of 2013 and the second half of 2013 declined at rates between 22-50%. Henderson called that “quite significant,” but noted that many of those wells produced between 1.5-3 Bcf of natural gas within the first six months of the year.

There is little production data available from Pennsylvania’s shallower targets such as the Rhinestreet and Burket Shale formations, but two of the 17 Utica wells drilled in the state produced more than 8 MMcf/d of natural gas from July-December.

Dave Yoxtheimer, an MCOR extension associate and hydrologist, said 5.9 billion gallons of water were used to hydraulically fracture (frack) wells in Pennsylvania last year, or about 16.3 million gallons per day.

He added, however, that 87% of the flowback and production water produced in the state last year was reused for fracking.