Pennsylvania’s unconventional natural gas production grew at pre-pandemic rates through the first nine months of the year as prices and demand rebounded, according to the state’s Independent Fiscal Office (IFO). 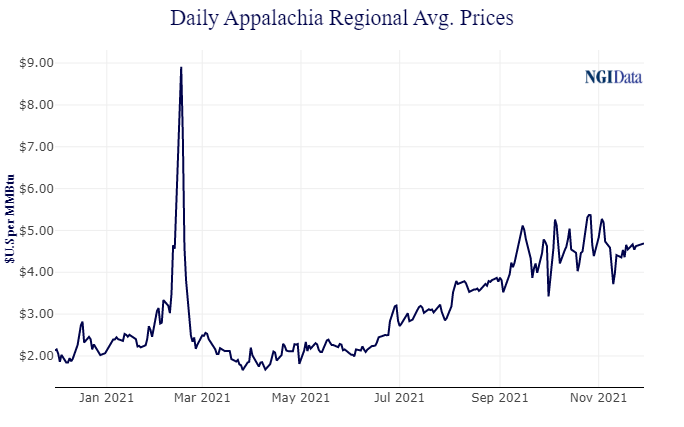 The IFO said unconventional production came in at 1.884 Tcf in 3Q2021, or 6.8% higher than the year-ago period, resembling the strong rates of the first and second quarters. Appalachian producers made price-related curtailments throughout 2020 as they grappled with low demand in the United States and across the world that helped to force production down across the country.

As Covid-19 restrictions have eased and lower supplies have squeezed the market, producers in Pennsylvania have slowly brought back volumes throughout the year. Through August, data from the U.S. Energy Information Administration (EIA) cited by the IFO shows that Pennsylvania had the strongest year/year production growth rate of any of the nation’s top producing states at 7.7%.

While the market has improved, oil and gas producers continue to exercise capital discipline that has curbed natural gas output in places like Texas and Oklahoma, according to EIA data cited by IFO. Meanwhile, volumes in other top-producing states grew at rates closer to 2% through the first eight months of the year, the IFO said.

The IFO said Henry Hub prices averaged $4.28/MMBtu in 3Q2021, up 120% from the year-ago period, when Pennsylvania’s unconventional production grew at the lowest annual growth rate on record. The IFO also said spot prices in Pennsylvania jumped 187% year/year in the third quarter to average $3.54/MMBtu.

Prices are forecast to stay high through the winter and into early next year as storage levels aren’t as strong as they have been in years past and global demand for liquefied natural gas remains strong amid a supply shortage.

“Without a significant uptick in new wells spud, producing well growth will likely continue to decelerate or stagnate,” the office added.

The IFO said there was a notable uptick in new wells spud during 1Q2021, but their levels reverted to some of the lows seen last year during 2Q2021 and 3Q2021. Preliminary fourth quarter data from the state Department of Environmental Protection shows that wells spud in October and November were up 70% from the same time last year, according to the IFO.