Pennsylvania’s natural gas production broke another record, coming in just under 2 Tcf in the first half of this year. The total was 1.94 Tcf, about 520 MMcf higher than in the year-ago period, the Department of Environmental Protection (DEP) reported on Monday. 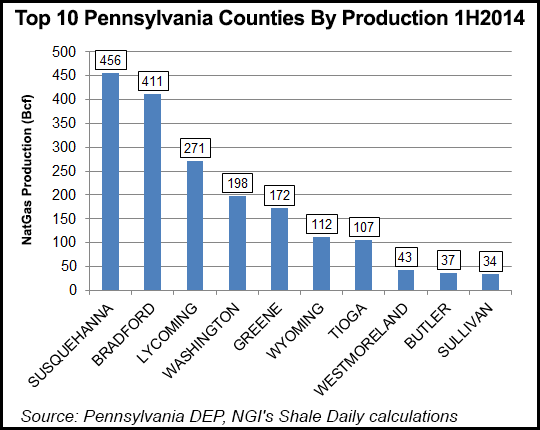 The gas produced in the first half of this year predominately was from the Marcellus Shale, and most were horizontal wells. Horizontal/vertical drilling also is targeting the Utica and Upper Devonian formations.

Some of the production numbers were staggering, particularly in the drier gas regions. As in previous periods, most of the state’s production came out of southwestern and northeastern Pennsylvania.

Leading the way was Susquehanna County, which reported 456 Bcf in the first six months of this year, followed by Bradford County at 411 Bcf. Lycoming County wells brought in close to 271 Bcf between January and June, while Washington County had close to 198 Bcf total.

According to the DEP, 1,676 new gas permits were issued between January and June.