New permitting requirements for unconventional natural gas wells and some midstream facilities that are aimed at cutting air pollution in Pennsylvania are set to take effect Aug. 8 after years in the making. 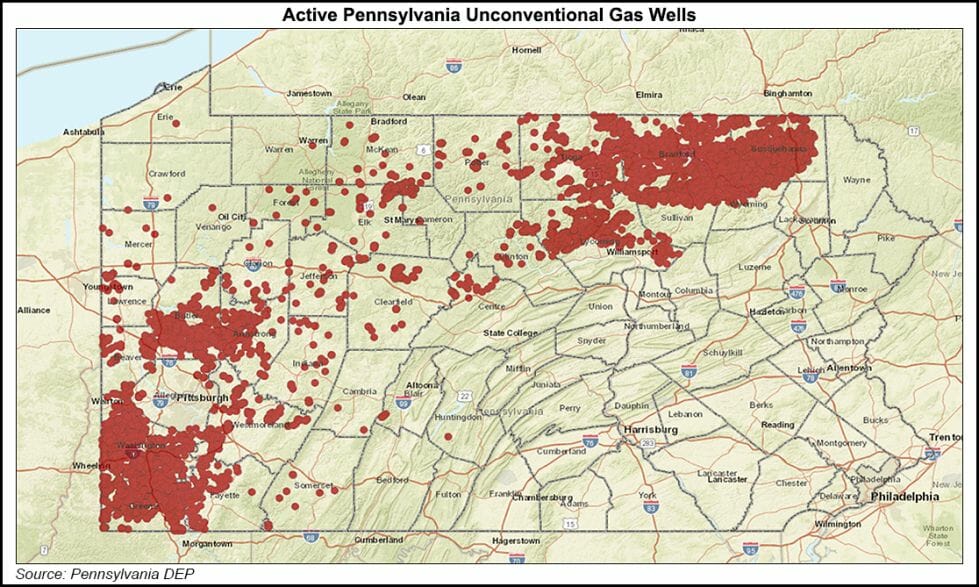 The state Department of Environmental Protection (DEP) has worked through thousands of public comments and coordinated with the industry to issue new permits for unconventional wells and revised permits for compression, processing and transmission facilities. The steps are the first in the nation to establish a threshold to control methane emissions at unconventional well sites and midstream facilities, according to DEP.

“These permits incorporate the most current state and federal regulations for controlling air pollution,” said DEP Secretary Patrick McDonnell. “The permits for new unconventional natural gas wells and new compression, processing and transmission stations along pipelines are some of the first in the nation to comprehensively address methane emissions from all equipment and processes, and they also address other types of air pollution that contribute to poor air quality.”

In addition to methane controls, the permits set thresholds on other pollution sources, such as volatile organic compounds, hazardous air pollutants and nitrogen oxides. Operators will be required to meet federal new source standards and state best available technology included in the permit conditions for equipment and processes to control pollution emissions.

The Marcellus Shale, where producers now churn out more than 5 Tcf annually, has vaulted Pennsylvania to the nation’s No. 2 natural gas producer behind Texas. The new permits are part of Gov. Tom Wolf’s plan to reduce industry emissions. DEP announced their implementation on Thursday, which was hailed by environmental groups.

“Pennsylvanians can breathe easier once these methane safeguards are in place,” said Environmental Defense Fund President Fred Krupp. “This progress toward cleaner air must continue with concrete steps to reduce pollution from the hundreds of thousands of existing oil and gas facilities across the state.”

The industry, which is already fighting the DEP over a broader regulatory package that would expand other requirements, had a mixed response.

“Our efforts to manage the resource have improved air quality as noted by the DEP and other independent reports,” said Marcellus Shale Coalition President David Spigelmyer. “Despite this positive and continued progress, we remain concerned about imposing additional requirements through operating permits, particularly those that exceed DEP’s statutory authority.”

Wolf, who called the permits a “win-win” and said they would benefit both the environment and the industry by curbing the costs associated with methane emissions, has also announced plans to develop rules for methane leaks from existing industry facilities and best management practices, including leak detection programs to further reduce emissions.