A bill that would shield Pennsylvania landowners from post-production costs by requiring a minimum royalty payment of 12.5%, or one-eighth of the value of oil and gas produced, has again passed the House Environmental Resources and Energy Committee. 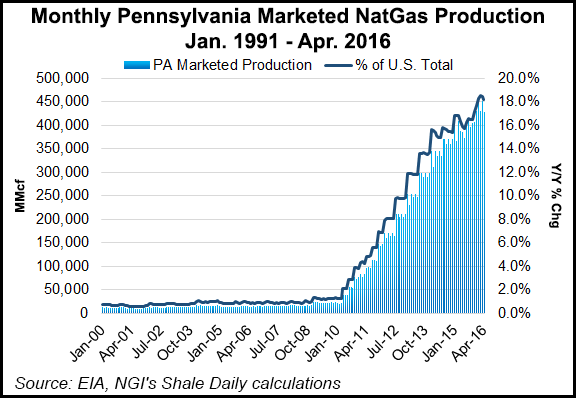 HB 1391 cleared the committee by a vote of 20-7. Similar legislation unanimously passed the committee two years ago but languished after it faced strong opposition from producers and a lack of support from lawmakers on both sides of the aisle (see Shale Daily, June 20, 2014). In June 2015, the bill was reintroduced and referred to the energy committee where it sat until Monday before the vote (see Shale Daily, June 26, 2015).

“There has been a great deal of work done with legislative colleagues and stakeholders on this issue for some time, and HB 1391 represents a more simplified effort to provide fairness for natural gas drilling lease holders,” said the bill’s author, Republican Rep. Garth Everett of Lycoming and Union counties, where Marcellus Shale development has been robust. “The approval by the committee signals that this is a good bill worthy of open debate on the House floor…We have continued to push this effort for the protection of the shale gas well lease holders.”

The state’s producers, however, don’t see it that way and have opposed the legislation since it was first introduced.

“Rather than pursue legislation that clearly flies in the face of the constitutions of the United States and Pennsylvania, as it seeks to alter negotiated contracts between parties, the general assembly should be focusing its efforts on policy solutions that would improve market conditions, thereby making the gas more valuable for all involved,” the Marcellus Shale Coalition said. “This bill does nothing to help Pennsylvania workers or royalty owners other than ensure protracted litigation over the bill’s constitutionality for years to come.”

Everett was joined last year in sponsoring the legislation by four other Republican lawmakers from Northeast Pennsylvania. The legislation would clarify the state’s Guaranteed Minimum Royalty Act of 1979, which sets forth the minimum 12.5% payment to landowners with oil and gas leases. The statute, however, does not address marketing costs and how they should be factored into royalty payments. HB 1391 would require the state minimum.

The bill is not likely to be considered by the full House until later this year. The predecessor bill was also delayed and never received a full floor vote. Everett said floor debate could also include an amendment process.

The legislation was prompted by an outcry from landowners concerning producers that have deducted post-production costs to cover expenses such as compression, dehydration and transmission. After more than a year-long investigation, the state attorney general’s (AG) office filed a lawsuit in December against Chesapeake Energy Corp. and affiliates for allegedly deceptive business practices related to post-production expenses (see Shale Daily, Dec. 9, 2015). Anadarko Petroleum Corp. was later added to the lawsuit (see Shale Daily, June 2).

Similar lawsuits have been filed by landowners against other producers in the state and across the nation, particularly in Texas where Chesapeake has drawn particular ire (see Shale Daily, May 23; April 27; July 20, 2015). The AG’s office has said at least 4,000 Pennsylvania landowners could be involved in the state’s Chesapeake case.