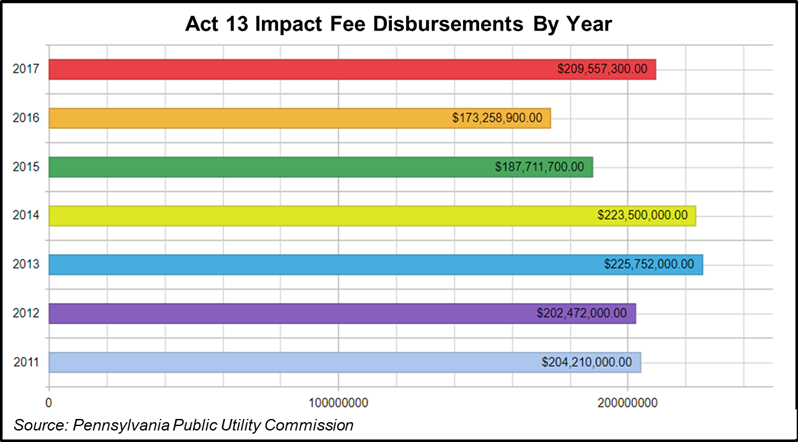 The fees are collected by the PUC and distributed to local communities and state agencies. The commission said about $114.8 million would be allocated to county and municipal governments affected by unconventional natural gas drilling. Another $76.5 million is to be transferred to the Marcellus Legacy Fund, which provides financial support for environmental, highway, water and sewer projects, among other things. State agencies are also set to receive about $18 million.

The PUC collected $173.3 million for 2016, which was the third straight year of impact fee declines as commodity prices and drilling activity fell in line with the mid-2014 downturn. But the industry has rebounded, and the Pennsylvania Independent Fiscal Office (IFO) projected earlier this year that impact fee collections would increase. IFO said 812 wells came online last year, compared with 504 in 2016.

The fee is levied annually on all unconventional wells in the state during their first 15 years of operation, as long as they produce more than 90 Mcf. It is not a volumetric fee, but rather one calculated using a multi-year schedule based on the average annual price of natural gas. The fee schedule, and the amount companies must pay for each well, depend on the number of years the wells have produced.

Benchmark prices crept above $3.00/MMBtu last year, pushing the fee schedule higher. Fees are also highest for wells in their first operating year. Companies are required to self-report annually and submit fees by April 1 for the prior year.

Since 2012, when the impact fee was established, the PUC has collected more than $1.4 billion.

Marcellus Shale Coalition President David Spigelmyer said Thursday last year’s collections demonstrate how the fees and other taxes paid by the industry help the state. He also took the opportunity to caution against Gov. Tom Wolf’s repeated proposals to implement a severance tax on unconventional natural gas production in addition to the impact fee.

But lawmakers, for the first time since Wolf took office in 2015, are reportedly close to reaching a state budget deal before the June 30 deadline. In previous years, quarrels over spending and taxes led to prolonged budget impasses that threatened the state’s finances. Wolf may sign this year’s $32.7 billion budget this week, according to reports. The spending plan includes no tax increases or new fees.

Wolf had proposed a volumetric tax on natural gas production as part of his budget earlier this year.

The PUC said Thursday it has forwarded its collection information to the state treasurer for payment and expects checks to be distributed early next month.