The impact fees paid by Pennsylvania’s unconventional natural gas producers in 2020 declined by $54 million year/year to about $146.3 million mainly because of lower natural gas prices, according to the state Public Utility Commision (PUC). 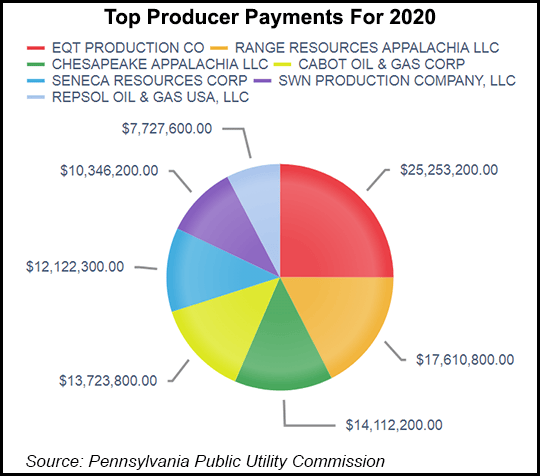 Since the fees were enacted in 2012, operators have paid more than $2 billion to the PUC for distribution to local communities and state agencies.

This year’s distribution is based on an average price of natural gas in 2020 of $2.08/MMBtu versus a 2019 average price of $2.63. Last year also saw the fewest number of new wells than in any year since the fees were first assessed.

Pennsylvania is the nation’s second largest gas-producing state behind Texas. Operators working in the Marcellus, Upper Devonian and Utica shales reported unconventional natural gas production surpassing 7 Tcf last year, up 3.9% from 2019. This was the lowest growth rate on record for a full year of production, according to the state’s Independent Fiscal Office.

The fee is levied annually on all unconventional wells during their first 15 years of operation, as long as they produce more than 90 Mcf. It is calculated using a multi-year schedule based on the average annual price of natural gas. The fee schedule, and the amount companies must pay for each well, depend on the number of years the wells have produced. Fees are highest for wells in their first operating year.

County and municipal governments directly affected by drilling are to receive a total of $71.5 million for the 2020 reporting year. Additionally, $51 million would be transferred to the Marcellus Legacy Fund. The fund provides financial support for environmental, highway, water and sewer projects, rehabilitation of greenways and other projects. About $23.7 million is to be directed to state agencies.