Saying it is “a great time to be a Pennsylvanian,” Gov. Tom Corbett thanked the oil and natural gas industry for bringing thousands of jobs to his state and predicted an even brighter future as he kicked off the Marcellus Shale Coalition’s Shale Gas Insight 2012 Conference in Philadelphia on Thursday. 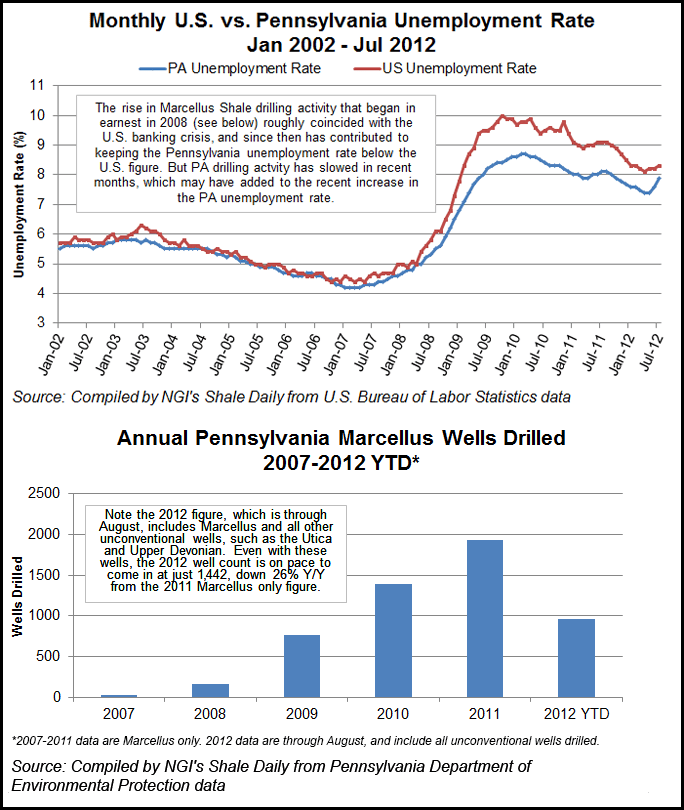 “I’m convinced that we are at the beginning of a new industry revolution, and you are the tip of the spear,” Corbett told conference attendees. “The Marcellus industry’s record has borne out almost every optimistic prediction. We predicted jobs, and the jobs are here…It can bring us jobs and prosperity while protecting the landscape from damage. Pennsylvania is getting it right.”

According to Corbett, nearly 240,000 Pennsylvanians are now employed in the natural gas industry or ancillary businesses. He also said nearly 30,000 of his constituents work in the core Marcellus industry, earning on average $30,000 more per year than the typical state resident.

“The Marcellus Shale gas play, and the bounty that lies beneath it in the Utica, give our society an opportunity to advance and to prosper,” Corbett said.

The rise in Marcellus drilling activity that began in earnest in 2008 roughly coincided with the U.S. banking crisis, and since then it has helped keep the state’s unemployment rate below the national rate. Drilling activity in Pennsylvania has slowed in recent months, which may have added to a recent increase in the state’s unemployment. Pennsylvania’s total well count is on pace to reach 1,442 this year, a 26% decline compared with 2011 figures, which included only Marcellus Shale wells.

Corbett said he was pleased to see the state’s coffers being filled with revenue from Pennsylvania’s new Marcellus Shale impact fee. Natural gas producers have paid most of the $205.9 million owed under the fee, an amount that exceeded initial expectations (see Shale Daily, Sept. 12).

“We got that one right,” Corbett said. “Last year at this time, the opposition was fretting about the state’s failure to pass a $100 million construction tax. This year the citizens of Pennsylvania collected twice that amount, all of it targeted to public services and protecting the environment.”

But Corbett added that despite the added impact fee revenue, the state isn’t quite where it needs to be financially.

“The state budget remains starved by past overspending and haunted by the recession,” he said. “But we are advancing, even in the face of unreasoning opposition.”

During his remarks, the Republican governor briefly targeted opponents of shale gas development, many of whom were reportedly planning to demonstrate across the street from the Pennsylvania Convention Center. But the conference was not disrupted and Broad Street appeared quiet Thursday morning.

“Our opponents agree that we can land a rover on Mars, but they can’t bring themselves to think that we can safely drill a mile into our own soil,” Corbett said. “After all of the predictions of disaster, and the fearful warnings of people with no understanding of the industry, Pennsylvania is reaping a bounty.

“It is beyond belief that there are still people who would trade this progress for a return to the status quo. We need people who understand that a business boom at one end of the state has an effect and can shake up the economy at the other end of the state.”

Indeed, the shale boom has stretched across the country to re-energize a Philadelphia landmark. The previous day Corbett joined in the ceremonial kick-off for a joint venture that will use Bakken crude oil from North Dakota and Marcellus Shale gas to keep the doors open at the 146-year old refinery that had been owned by Sunoco. It now is being run by Philadelphia Energy Solutions, a joint venture of Carlyle and Sunoco, with plans to bring in by rail as much as 140,000 b/d of Bakken crude for processing (see Shale Daily, July 3). The processing operation would use Marcellus Shale gas.

The plant had been headed for the scrap heap, the victim in part of higher priced imported feedstock. Corbett said he was also hopeful that plans would materialize to keep open two more refineries in the region, in addition to Sunoco’s Philadelphia refinery (see Shale Daily, July 16; July 3a).

“The Marcellus has reached into some very old quarters of our economy and our state and brought them back to life,” Corbett said. “Because of Pennsylvania’s new energy boom, one of those refineries is experiencing a new role in making America energy-rich and our citizens gainfully employed. I can easily foresee a time when the three Philadelphia refineries will be processing all types of oil and Marcellus gas from across the state. It makes too much sense not to tie the far corners of our state together in this work.”

Corbett then segued to a proposal by Shell Chemical LP — a subsidiary of Royal Dutch Shell plc — to build an ethane cracker in Beaver County, but he didn’t say if there were any new developments with the project. While Shell reportedly weighs the economic viability of the project, Corbett and state legislators pushed through tax breaks to sway the company (see Shale Daily, Aug. 6; July 3b; June 12).

“This plant would mean an investment of more than $4 billion,” Corbett said. “If we used our imaginations and chose to partner with this industry, the wet gas harvested in Pennsylvania will be processed in Pennsylvania. The downstream jobs will be created here, and not in some other state or some other country. We are doing this strategically, with an eye not to the next two or four years, [but] to the many decades ahead.”