The Pennsylvania House on Wednesday struck down by a wide margin Democratic Gov. Tom Wolf’s proposal to enact a 3.5% severance tax on unconventional natural gas production, a move that could effectively end the proposal. 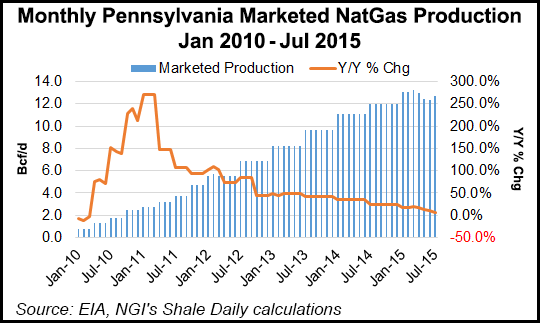 Ahead of debate in the House on Wednesday, Wolf unveiled a plan that revised lower his initial 5% severance tax proposal to 3.5%. The governor’s previous gas tax proposal also had called for a 4.7/Mcf volumetric fee (see Shale Daily, Feb. 11). In the new plan, he also asked lawmakers to consider an increase in the state’s personal income tax rate to 3.57%, a 16% increase. The tax plan failed by a vote of 127-73, with Wolf failing to secure the support of all 84 Democrats.

“Once and for all this $1 billion severance tax for education can be put to bed,” said Republican House Appropriations Chairman Bill Adolph after the vote. “We can get down to real facts and get a budget for all Pennsylvanians as soon as possible.”

Throughout the budget season, Wolf has pushed hard for an increase in the personal income and sales taxes, in addition to establishing a severance tax, which he campaigned on as part of a plan to help plug the state’s $2 billion-plus deficit.

The tax plan that was voted down had included concessions, as Wolf removed a proposal to increase the sales tax. Instead, Wolf lowered his severance tax proposal late Tuesday and kept the volumetric fee. He had worked for the last week to convince rank-and-file Republicans and Democrats to support his plan, with his administration indicating earlier this week that it had the votes to advance it.

Wolf needed 18 GOP votes in the House to get a majority if all 84 Democrats had supported his plan, but Republican leaders had insisted the governor did not have the necessary support. Prior to the vote, one industry source said he did not believe all the House Democrats were on board for fear of alienating constituents in increasingly conservative districts where oil and gas development has a strong foothold.

Wolf made no mention of his severance tax proposal during a press conference after the vote, but he said Wednesday’s developments give lawmakers a chance to move past some of the major sticking points that have held up the budget. He said he hopes to work more closely with GOP lawmakers going forward.

Democratic leaders, however, said their voice in the Assembly can’t be ignored and noted that significant work remains to get a budget passed.

The Marcellus Shale Coalition (MSC) greeted the vote against the tax proposal with appreciation, noting that the industry can ill-afford a tax increase at a time of depressed commodity prices and retrenchment.

“Our industry remains under an enormous amount of pressure with the deep and ongoing global commodity markets downturn, which has resulted in tens of thousands of jobs lost across the industry,” said MSC President David Spigelmyer. “…We appreciate that many in Harrisburg recognize these harsh economic realities as well as the devastating impacts that even higher energy taxes would have on small businesses, consumers, families and manufacturers.”

House Majority Leader Dave Reed said GOP leadership has already reached out to Democratic leaders and Wolf for a meeting as soon as possible to get a final spending plan on the table and pass a budget. “Hopefully, that will happen sooner rather than later. And we can bring this budget impasse to an end.”