Sunoco Logistics Partners LP can start construction of the Mariner East (ME) 2 pipeline — a natural gas liquids project that’s been in the works for years — after the Pennsylvania Department of Environmental Protection (DEP) late Monday approved 20 key permits. 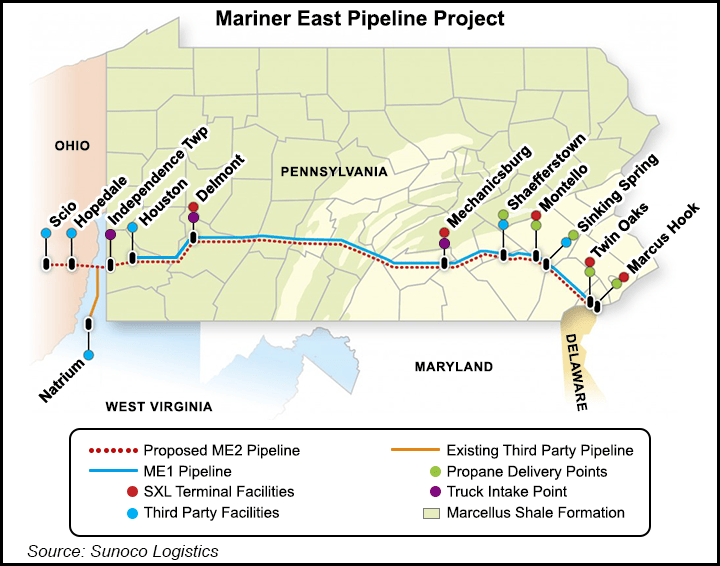 The companylaunched a binding open season in 2013. It has battled in state courts to defend the project, which it’s billed as a boon for Pennsylvania’s economy, in the face of staunch opposition from environmental groups, concerned citizens and municipalities. Sunoco is targeting a long-awaited start-up in 3Q2017.

ME 2 was initially slated for in-service at the end of last year, but the company then said start-up would be pushed back to the first half of 2017 in order to obtain all necessary permits. Last July, however, DEP said that due to the complexity of the project, it would enhance and extend public participation for water obstruction/encroachment and erosion/sediment control permits, again pushing back the project’s timeline.

Part of DEP’s review process included revisions to the original permit applications submitted by Sunoco. The agency received the revisions in December in response to technical deficiency letters it sent the company in the fall. To the dismay of project opponents, who wanted more public comment opportunities, DEP announced on Monday that it had resolved those deficiencies and issued the 17 necessary water permits and the three required erosion permits.

Acting DEP Secretary Patrick McDonnell called the regulatory review an “immense undertaking,” in which the DEP held five hearings during a 60-day period, reviewed permit applications for more than 20,000 hours and responded to 29,000 comments.

“The intensive review included input and feedback from scores of DEP biologists, wetland ecologists, engineers, legal staff and permit reviewers,” McDonnell said. “Further conditions were put on the operator as we move forward to ensure accountability to state standards.”

The 350-mile project would transport ethane, butane and propane from processing and fractionation facilities in Ohio, Pennsylvania and West Virginia to the Marcus Hook Industrial Complex near Philadelphia for distribution to domestic and international markets. Combined with the existing ME 1, athird proposed pipeline and Mariner West, the entire system would have a combined capacity of up to 800,000 b/d.

Sunoco has entered several condemnation proceedings across the state since development started. In most cases, landowners have argued that the company shouldn’t be allowed to use eminent domain to build the pipeline because it’s been designed as an interstate system to primarily serve overseas and out-of-state markets. The company has claimed otherwise, producing at trial orders and certificates of public convenience from the state that acknowledge the system’s intrastate and interstate characteristics that could benefit Pennsylvania.

Sunoco said Tuesday that by keeping the liquids in Pennsylvania for storage, processing and distribution, ME 2 would offer the state an opportunity to build on its manufacturing economy. While the stateSupreme Court has refused to hear an appeal challenging Sunoco’s power of eminent domain, legal challenges remain and others are likely now that DEP has concluded its review process and issued permits.

Sunoco has noted that it has avoided condemnation proceedings with a “vast majority” of landowners, with whom it has signed easements. The company defended its work across the state after DEP approved the project.

The project required water permits for each of the 17 counties it crosses as well as one erosion permit for each DEP region it crosses in the southwest, south-central and southeast parts of the state. DEP added that it did not hold an additional public comment period or additional hearings because the revisions Sunoco made to its applications “did not substantively change right-of-ways nor the corridor of the permits.” ME 2’s approval comes after theFederal Energy Regulatory Commissionauthorized this month a series of unrelated Appalachian projects representing more than 5 Bcf/d of dry gas takeaway capacity.