Pennsylvania’s natural gas industry had mixed reactions to Gov. Tom Wolf’s recent executive order to cut greenhouse gas (GHG) emissions, with some on edge about the policies that could follow and others pointing to the role that the fuel plays in helping to meet climate protection goals. 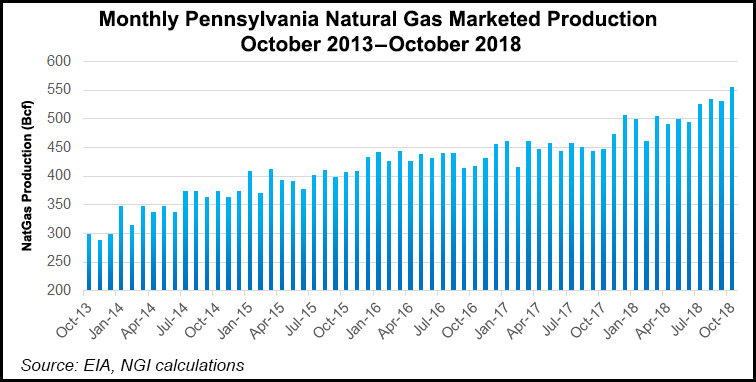 While it’s limited in scope, Wolf announced the state’s first-ever executive order “in the absence of leadership from the federal government” to reduce greenhouse gas emissions from 2005 levels by 26% by 2025 and by 80% by 2050. The goals put the state closer in line with states that include New York, New Jersey and Maryland, all members of the U.S. Climate Alliance formed after President Trump announced his intent to withdraw from the Paris Agreement.

“It is aimed at state agencies, which is about all it could be aimed at as an executive order, it really can’t be any broader than that,” said former Department of Environmental Protection Secretary Michael Krancer. “What I think it translates to is the state government should be using more natural gas than it is already,” he told NGI’s Shale Daily.

While Wolf acknowledged the importance of natural gas to the economy and energy independence during an event in Pittsburgh, he made no mention of gas factoring into the new targets.

The gas industry is a significant source of methane emissions and the largest industrial source of volatile organic compound emissions, according to the U.S. Environmental Protection Agency. Burning natural gas, however, produces nearly half as much carbon dioxide as coal.

The U.S. oil and gas industry has invested an estimated $339 billion since 1990 toward improving its environmental performance, according to the American Petroleum Institute (API). In 2016 alone, API estimates that $17.1 billion was spent on the environment and $15.3 billion was spent implementing new technologies, creating “cleaner” fuels and funding ongoing environmental initiatives.

“The United States is leading the world in GHG reductions and no other industry has done more to reduce carbon in the U.S. than America’s natural gas industry,” said API-Pennsylvania Executive Director Stephanie Catarino Wissman, in response to Wolf’s announcement.

Spigelmyer added that given the strides the free market has made, policymakers should “support common sense energy and climate-related solutions that encourage responsible natural gas production and use given the overwhelmingly clear benefits” of the resource.

Wolf’s order has no immediate impact on the gas industry. Rather, it directs state agencies to purchase more renewable energy sources to offset at least 40% of their annual electricity use. It would also target replacing 25% of the state’s passenger car fleet by 2025 with electric battery and plug-in hybrid cars. The order also calls for state agencies to reduce overall energy consumption from 2017 levels by 3% annually and by 21% by 2025.

Wolf, a Democrat, issued the order after winning reelection by a wide margin in November. He set targets for state agencies the same week as newly-elected Democratic Colorado Gov. Jared Polis pledged that 100% of that leading gas-producing state’s electricity would come from renewables by 2040. The actions follow a campaign season in which Democrats featured climate protection prominently in their runs for office.

Environmentalists hailed the order. PennFuture CEO Jacquelyn Bonomo said it reenergizes the state’s “moribund climate policy that hasn’t significantly changed in over a decade.” PennFuture was joined by the Environmental Defense Fund (EDF) in calling on state policymakers to expand upon the order, pressing for legislation to curb emissions from the power sector, like other states that have passed laws and regulations to do so more effectively.

“Moving forward, developing enforceable climate pollution limits for both carbon and methane will be critical to ensure that Pennsylvania achieves these goals,” said EDF’s Mandy Warner, senior manager of climate and policy.

Wolf cautioned that his order would not likely be followed by legislation, as the general assembly remains firmly in control of Republicans, who mostly favor the free market over state mandated programs. He did not rule out additional regulations.

The possibility of what comes next has some concerned. Executive Director Dan Weaver of the Pennsylvania Independent Oil and Gas Association argued that the industry is already heavily regulated. Wolf’s administration implemented a methane reduction strategy in 2016, including stronger permitting requirements for new unconventional gas wells and some midstream facilities that were rolled out last year. State regulators are also at work on draft regulations to curb emissions from existing production and midstream operations.

“I would agree to the point that there’s no immediate impact,” Weaver said, warning that if the state is starting to target more emissions reductions, then in the long-term, it’s eventually going to involve the gas industry. “That’s our concern..this is kicking in the door as to what’s to come.”

Pennsylvania is the nation’s second largest gas-producing state behind Texas. Unconventional operators were on track to produce 6 Tcf as 2018 came to an end. The low-cost supplies have accelerated coal-to-gas switching in the region, creating additional in-basin demand.

If additional regulations are implemented to better incentivize the market for competing fuels, it could eventually erode some of those gains. A more tangible pathway to emission reductions might be through the Regional Greenhouse Gas Initiative, a market-based program among states in New England and the Mid-Atlantic to cap and reduce GHG from the power sector. New Jersey recently proposed draft regulations to cut emissions so it can rejoin the initiative. While Wolf floated the idea for Pennsylvania to join during his 2014 campaign, he hasn’t mentioned it since.

The 2025 and 2050 targets in his order do mirror those in the DEP’s draft Climate Action Plan released in November, which is required by a 2008 law and must be revised every three years. Among the strategies highlighted in the report for helping the state cut its emissions are preventing the state’s nuclear power plants from closing.

Wolf’s announcement comes at a time when state lawmakers are debating the merits of advancing subsidies for ailing Nuclear Power Plants that have faced stiff competition from low-cost natural gas. Despite the ire of gas-fired generators, a group of bipartisan lawmakers released a report late last year urging legislative action to better value the baseload and near-zero emission attributes of nuclear facilities.

After Wolf issued the executive order, another former DEP secretary, John Hanger, took the opportunity on Twitter to stress the importance of those facilities in a preview of the firepower Wolf’s order might lend to the sector’s cause. “Keeping PA’s nuclear plants, including [Three Mile Island] operating is essential to meet these goals,” Hangar said of Wolf’s GHG reduction targets.

Krancer disagreed, saying the battle unfolding between the gas and nuclear industries over subsidies is a totally different issue.

“I think it’s apples and oranges,” he said. “The nuclear subsidies fans have their own platform in which they’re championing the clean air aspects of nuclear, the zero emissions and all of that. I don’t think they’re really that related.”

He added, however, that “the executive order makes good press, and it’s limited in its effectiveness to state agencies, but it’s certainly a meaningful exercise,” that raises broader questions about the state’s energy policies moving forward.