Officials with the Pennsylvania Department of Conservation and Natural Resources (DCNR) will participate in an online forum this week to discuss potential Marcellus Shale gas drilling in the Loyalsock State Forest. 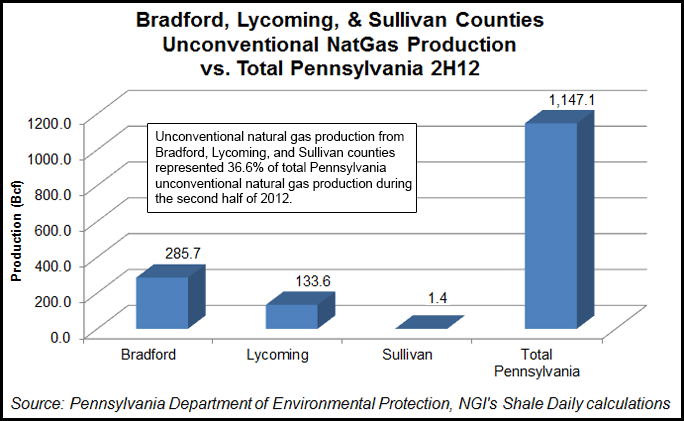 The DCNR said the forum, scheduled from 1 p.m. on Thursday, will be hosted by Penn State Extension as part of a series of one-hour webinars to discuss shale gas drilling.

“DCNR has heard from numerous individuals and organizations on this issue through letters, phone calls and in a meeting this month with local stakeholders,” DCNR Secretary Richard Allan said in a written statement Friday. “This webinar gives us an additional opportunity to exchange information and respond to questions about potential gas development in the Loyalsock, where the state does not own the subsurface gas rights.”

The Loyalsock State Forest comprises 114,494 acres in Bradford, Lycoming and Sullivan counties. Anadarko Petroleum Corp. and Southwestern Energy Co. own the mineral rights under 25,621 acres of the forest. The property is also known as the Clarence Moore tracts.

Bradford, Lycoming and Sullivan counties accounted for 36.6% of the state’s total unconventional natural gas production during the second half of 2012, according to Pennsylvania Department of Environmental Protection data and NGI’s Shale Daily calculations. Of the 1,147 Bcf produced by the state in 2H2012, 286 Bcf came from Bradford County, 134 Bcf from Lycoming County and 1.4 Bcf from Sullivan County.

The Clarence Moore tracts were at the center of a legal dispute that began in the early 1980s and ended in 1999 with a ruling in the case Estate of Clarence Moore and Pennlyco Ltd. v. Pennsylvania and DCNR by the Pennsylvania Board of Claims, which ruled that Moore had the right to access 6,841 acres. Those rights were bequeathed to Anadarko and Southwestern after Moore died in 1997.

On March 8, Rep. Greg Vitali (D-Havertown) introduced a bill which calls for a moratorium on leasing more DCNR land for oil and gas drilling. The bill, HB 950, has 35 co-sponsors and is before the House Environmental Resources and Energy Committee, which Vitali serves on as the Democratic chairman.