Pennsylvania’s shale gas producers are keeping a close eye on a court case that could find them liable for subsurface trespass if the rock fissures formed through hydraulic fracturing (fracking) techniques deep underground stretch beneath unleased property near drilling units. 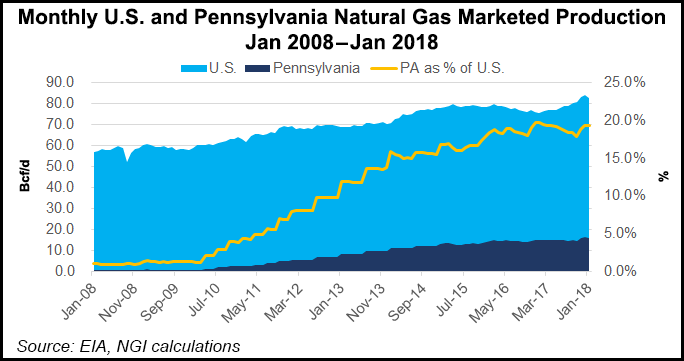 In an opinion handed down this month by the Pennsylvania Superior Court, a two-judge panel called into question the rule of capture and how it applies to unconventional development. The rule is considered a fundamental principle in energy law that has long been applied to conventional development from shallow reservoirs, which prevents liability for draining migratory oil and gas from underneath private land.

“I think this case could have an impact on shale development because it’s opening the door for trespass liability,” said Pennsylvania State University’s Ross Pifer, director of the Center for Agricultural and Shale Law. “There still would have to be proof of trespass, but this court is saying that it’s possible for a company to be held liable for trespass.”

Filed in 2015 in the Susquehanna County Court of Common Pleas by Adam Briggs, his wife and other family members, the plaintiffs allege that Southwestern Energy Co. for years has been unlawfully extracting natural gas under the 11-acre unleased parcel of land they own from an adjoining leased property. The Briggs have asserted trespass and are seeking punitive damages.

Southwestern has argued that the Briggs’ claims are barred by the rule of capture. The trial court agreed and said the rule precludes the plaintiffs from recovering damages and asserting trespass. On appeal to the Superior Court, however, the Briggs argued that there are significant differences between fracking and the “conventional process of tapping into a pool or reservoir of fluids.” They argued that gas in shale formations would remain trapped forever if not for the “forced extraction” through fracking.

The rule of capture has for more than 100 years been applied to conventional oil and gas extraction. In 1889, for example, the Pennsylvania Supreme Court found that gas “is a mineral with peculiar attributes,” and therefore the question of ownership requires a different analysis. The high court noted that unlike other minerals, oil and gas “have the power and the tendency to escape without the volition of the owners,” describing the hydrocarbons as having a “fugitive and wandering existence.”

Until this month’s opinion, Pennsylvania courts had not yet considered how the rule of capture should be applied to unconventional drilling and stimulation techniques, nor whether they constituted trespass.

The Superior Court wrote in its opinion that “extensive research” revealed only two significant cases nationwide that have addressed the issue in the unconventional drilling era. The Texas Supreme Court found that there is no actionable trespass caused by unconventional wells, while a federal court in West Virginia disagreed in a case that was eventually settled.

The U.S. District Court for the Northern District of West Virginia vacated its order after the settlement. But the court wrote that under the rule of capture for unconventional development, “companies may tell a small landowner that either they sign a lease on the company’s terms or the company will just hydraulically fracture under the property and take the oil and gas without compensation.”

The Pennsylvania Superior Court said it was persuaded by the West Virginia court’s analysis and the dissenting opinion in the Texas Supreme Court case. Based upon its review, the Superior Court concluded that “hydraulic fracturing is distinguishable from conventional methods of oil and gas extraction…

“Unlike oil and gas originating in a common reservoir, natural gas, when trapped in a shale formation, is non-migratory in nature,” the judges wrote. “…Shale gas does not merely ”escape’ to adjoining land absent the application of an external force…Instead, the shale must be fractured through the process of hydraulic fracturing; only then may the natural gas contained in the shale move freely through the artificially created channels.”

The court reversed and remanded the case to determine if Southwestern committed trespass with its shale wells. The opinion noted that it could be difficult to prove and could create “evidentiary difficulties,” but the judges found that is not enough to stop the trespass claim from advancing.

“In the instant case, it is unclear from the record before us whether Southwestern’s hydraulic fracturing operations resulted in a subsurface trespass to appellants property,” the court said. “There does not appear to be any evidence, or even an estimate, as to how far the subsurface fractures extend from each of the wellbore on Southwestern’s lease. However, we conclude that appellants allegations are sufficient to raise an issue as to whether there has been a trespass, and thus, the entry of summary judgement in favor of Southwestern was premature.”

Given how little case law exists on the matter, Pittsburgh-based attorney Robert Burnett, chairman of the oil and gas practice group at Houston Harbaugh, said the Briggs opinion provides clarification under Pennsylvania law.

“Yes, it’s being remanded down to the trial court for additional proceedings, but that doesn’t change the precedential and binding nature of the opinion,” Burnett told NGI’s Shale Daily. “In subsurface trespass cases, in which frack fissures cross property boundaries into unleased acreage, the driller will not be able to assert the rule of capture as an affirmative defense.”

Burnett, who has litigated similar issues on behalf of landowners, said he doesn’t see the case “upsetting the apple cart” and significantly impacting natural gas development in the state.

“Drillers in the Marcellus Shale have been aware that frack fissures extend from 200-300 feet from the wellbore. They have taken that effective wellbore length issue into consideration when they form production units,” he said. “And I don’t think this is going to change much, you may see additional protective leasing done, but for the most part, in my experience, drillers have made sure they have sufficient acreage around wellbores so as to not expose themselves to liability for potential subsurface trespass.”

Executive Director Dan Weaver of the Pennsylvania Independent Oil and Gas Association, said those kinds of leasing practices mostly depend on the operator. He said his organization has taken notice of the case. A representative for the Marcellus Shale Coalition also said the organization is watching the proceedings closely.

Pifer agreed that oil and gas companies have been cognizant of the issue for years and have leased accordingly, but said there’s likely to be more cautionary leasing after the opinion. Absent that, he said, companies might have to locate wells farther away from the edges of their drilling units, which could also lead to some stranded gas.

What the court failed to address could have more implications if the rule of capture is further litigated. In its opinion, the Superior Court discussed fracking, but it did not mention high-volume fracturing, the technique typically used today in unconventional development. Conventional wells are fracked too. The stimulation techniques are two different things; they use varying pressures, additives, water volumes and equipment, and occur on very different scales.

According to Pifer, the failure to make that distinction is one of the things about the case that “has injected a certain amount of confusion,” because the court said “there’s the possibility of liability, but in what situation?

The judges also appeared to make a sharp distinction between shale gas and conventional gas. Shale is a source rock that has long fed shallower reservoirs; it does migrate.

“We talk about conventional gas; well that’s ultimately where it came from,” Pifer said of shale formations. “The court seems as if it’s establishing a standard based on the permeability of rock and saying that shale gas has a low permeability, so we’re not going to apply the rule of capture to technologies that are used to extract that, but for gas that has a higher permeability we’re going to apply a different standard.”

At this point, however, attorneys said such issues are not factual to the Briggs case. If the case is appealed, those questions may get a second look.

Burnett said the case now goes back to the Susquehanna County Court of Common Pleas for intensive discovery, expert testimony on where and how far those frack fissures extend, how much gas was drained by them and what the correct amount of damages should be if trespass is established.

While those are “complicated and complex issues,” it’s difficult to gauge the case’s impact at this point, he said.

“I guess I’m interested to know if this gets appealed. I think that would answer the question of how this is going to get handled in the future,” Pifer said. “If it stands on appeal, or if it’s not appealed, I would expect that we’re going to see more litigation asserting that there has been a trespass. This is opening the door for that claim.”