A Pennsylvania appellate court has upheld a conditional use permit issued by a township in Lycoming County to allow natural gas drilling to go forward in a residential area there. The key ruling finds that such operations are compatible with local residential zoning. 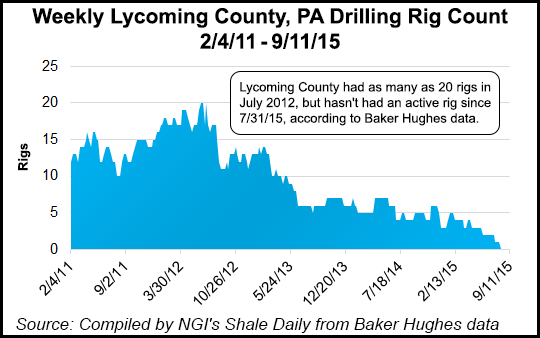 Denver-based Inflection Energy LLC had been forced to apply for a conditional use permit with Fairfield Township because areas zoned for residential-agricultural use were not authorized for natural gas wells. After the township granted the permit, homeowners in the area filed an appeal against with the Lycoming County Common Pleas Court citing concerns about their well water, truck traffic, noise, light pollution and possible criminal records of employees who could be hired by Inflection to work at the well site.

The common pleas court threw out the permit in September 2014, siding with the residents and saying the company failed to provide adequate testimony about how its oil and gas operations met the established criteria for the residential-agricultural zone (see Shale Daily, Sept. 4, 2014). Until Monday, when the appellate court overturned the lower court’s ruling, drilling opponents who have filed similar challenges in at least five other counties across the state had cited the lower court’s decision in their arguments that residential-agricultural zones are not suitable for oil and gas wells as industrial zones are (see Shale Daily, Dec. 1, 2014).

Inflection had been forced to stop its operations in the township until Monday’s ruling. The appellate court found that the residents challenging the permit failed to provide adequate evidence for their concerns. It also said the lower court erred in deciding that truck deliveries would be disruptive during pad construction and noted that zoning regulates the use of land and not development and construction activities.

But the appellate court’s ruling also resolves some of the fallout from a landmark decision by the Pennsylvania Supreme Court in December 2013 that struck down parts of the state’s omnibus oil and gas law, Act 13. That ruling returned to municipalities their right to change or enforce local zoning laws and it no longer compelled local governments to allow natural gas operations across all zoning districts (see Shale Daily, Dec. 20, 2013). That has prompted drilling opponents to challenge plans for drilling in residential zones.

But the appellate court noted that like most of the state, the majority of Fairfield is zoned for residential-agricultural use. The township has also already permitted four other gas wells within the residential zones. The appellate court said that oil and gas wells are compatible with such zoning, similar to public service facilities such as power plants, parking garages or offices.

It’s unclear if the residents, represented by the environmental advocacy group PennFuture, plan to file an appeal with the state supreme court. Their attorney could not be reached to comment.

Lower 48 producer Northern Oil & Gas Inc. saw its 1Q2021 output climb over the previous three months as more curtailments were eased in the Bakken Shale and well productivity improved. The company, which has positions in the Bakken, the Marcellus Shale and the Permian Basin, reported overall production of 38,417 boe/d for the first…