A biannual production report posted by the Pennsylvania Department of Environmental Protection (DEP) shows the state’s stable of unconventional gas wells produced a record 1.42 Tcf during the first six months of 2013. 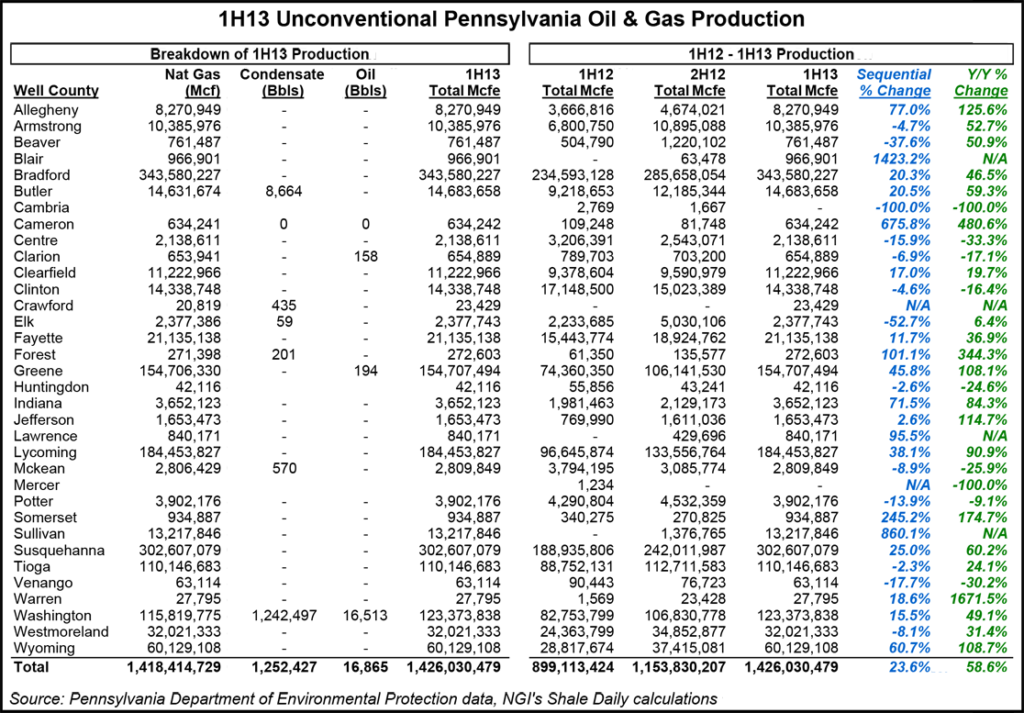 The latest production figures — most of which are from wells targeting the Marcellus Shale, but also including wells targeting the Utica Shale and other formations — are a 58.5% increase over production from first six months of 2012, when the DEP reported unconventional wells produced 894.8 Bcf (see related story; NGI, Aug. 27, 2012). Production during the first six months of 2013 was also 23.5% higher than the 1.5 Tcf produced from July through December 2012 (see NGI, March 11).

According to the DEP, the well that produced the most natural gas during the first half of 2012 was Southwestern Energy Production Co.’s Campbell Ercole Demento No. 4H. Located in Bradford County’s Stevens Township, the well produced 14.1 Bcf. Cabot Oil & Gas Corp.’s T Flower No. 2 and T Flower No. 1 wells in Susquehanna County’s Springville Township recorded the second- and third-highest production, at 5.49 and 4.13 Bcf, respectively.

The DEP’s Office of Oil and Gas Management has annual oil and gas production reports dating back to 2000 available on its website. The first Marcellus-only report covered a 12-month period from July 2009 to June 2010. Subsequently, the DEP released Marcellus-only reports that covered the full-year 2012 and the last half of 2011.

Beginning with the report from January through June 2012 report, the DEP began reporting all unconventional production without a breakdown by shale/tight gas and oil plays. The agency has also published a conventional well production report for the full-year 2012. The DEP said the changes were mandated by Act 13, the omnibus Marcellus Shale law.

Pennsylvania’s Oil and Gas Act requires unconventional well operators to submit production reports to the DEP twice a year — by Aug. 15 for the first six months of a year, and by Feb. 15 for the second half of a year, and for the full preceding year.

Spokeswoman Lisa Kasianowitz told NGI that the DEP was still waiting for 13 smaller operators that collectively own 50 wells, to report their production figures for the first half of 2013. The largest, Dallas-based Hunt Marcellus Operating Co. LLC, has 14 wells. Five operators have one well apiece.