Pennsylvania’s unconventional natural gas producers are projected to pay $247 million in impact fees for 2018, or about 18% more than they did in 2017, according to the state’s Independent Fiscal Office (IFO). 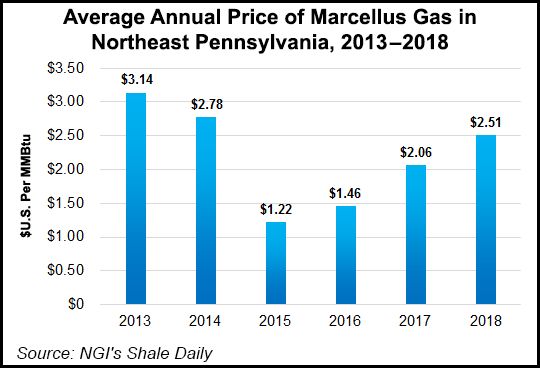 IFO said the increase would be mostly from the revenue collected from the 779 wells spud last year. The new wells, IFO said, would help boost collections by $15 million and offset collections from older wells with declining fees. Collections from hundreds of previously contested wells are also anticipated to lift impact fees by roughly $22 million after a key state Supreme Court opinion resolved a dispute over the definition of stripper wells that aren’t required to pay the fees.

The fee is levied annually on all unconventional wells in the state during their first 15 years of operation, as long as they produce more than 90 Mcf. It is not a volumetric fee, but rather one calculated using a multi-year schedule based on the average annual price of natural gas. The fee schedule, and the amount companies must pay for each well, depend on the number of years the wells have produced. Fees are highest for wells in their first operating year.

The state Public Utility Commission, which collects and distributes the fees to local communities and state agencies, took in nearly $210 million in 2017. Companies are required to self-report annually and pay the fees by April 1 for the prior year.

Marcellus Shale Coalition spokesman John Sutter noted that if the IFO’s projections hold, collections would set a record, exceeding the $225.8 million highmark set in 2013. Since the impact fee was established in 2012, the state has collected more than $1.4 billion from unconventional operators.