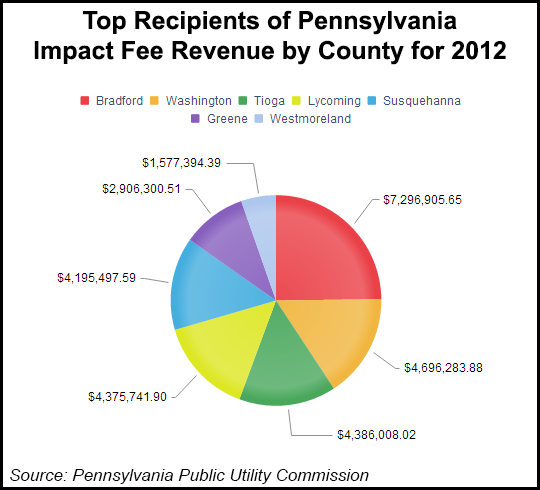 The PUC, empowered by Act 13 to collect impact fee revenue on behalf of local governments, said producers have paid $202.5 million in impact fees. The agency said $28 million will be paid to various state agencies for their regulatory duties. Under Act 13, 60% of the remaining revenue is awarded to localities affected by drilling, and 40% ($78.8 million this year) is deposited in the state’s Marcellus Legacy Fund.

“The more than $202.4 million collected this year brings the two-year total for impact fees collected to more than $406.6 million,” said PUC Chairman Robert Powelson. “The PUC is entrusted by the governor and the legislature with the collection and distribution of the impact fee monies. Again, we have met all of the deadlines in the legislation, which contains a complex and specific formula for getting this money into the hands of local communities.”

The PUC said it plans to mail payment checks on June 28.

“Our member companies are working each and every day to responsibly develop this clean-burning energy resource while also serving as good neighbors and community partners to ensure we get this historic opportunity right for all 12 million-plus Pennsylvanians.”

Lawrence Township, located in Clearfield County, was the top municipal recipient of impact fee revenue for 2012 at more than $797,000. Cumberland Township, in Greene County, was second with more than $787,000. The City of Williamsport, in Lycoming County, is set to receive more than $593,000.

Act 13, which was signed into law by Corbett in February, amended Title 58 (oil and gas) of the Pennsylvania Consolidated Statutes (see Shale Daily, Feb. 15, 2012). The law gives Pennsylvania’s counties the choice to collect an annual per-well fee from operators. The fee is set annually based on the price of gas and declines over 15 years but is set at $50,000 for all unconventional horizontal gas wells drilled through 2011.

Permian Basin giant Pioneer Natural Resources Co. has formally adopted targets by 2030 to sharply cut emissions across its Lower 48 operations, and it plans to tie executive incentive compensation to the goals. The strategy, to cut greenhouse gas (GHG) emissions by 25%, with methane emission intensities by 40%, was laid out in the Dallas-based…