Seven years after it was announced, the PennEast Pipeline has been canceled following repeated regulatory and legal setbacks that have increasingly complicated other natural gas infrastructure projects across the country. 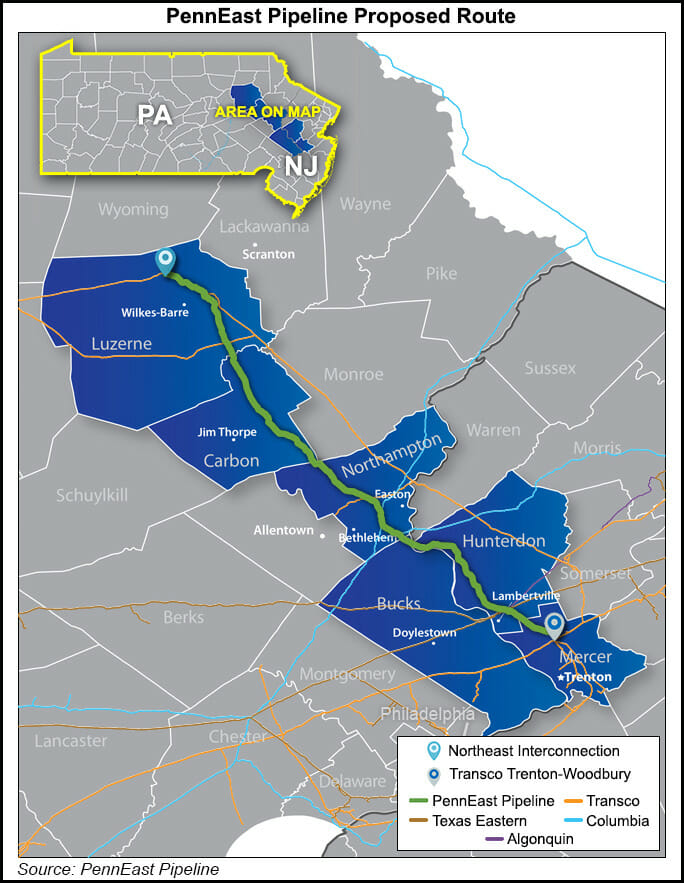 PennEast scrapped the project on Monday following what it said was “extensive evaluation and discussion” among its five member companies. The project battled landowners, environmental groups and the state of New Jersey for years. Despite a crucial victory for the pipeline over the summer, ultimately the developers said there were too many regulatory hurdles left, including the need for a water quality certification in New Jersey. The state previously denied the permit.

The project dropped its years-long efforts to condemn land owned by New Jersey last week. The decision came after the U.S. Supreme Court in June cleared a key roadblock for the project’s path toward completion when it found the pipeline could use eminent domain to obtain the parcels in question.

“We’re thrilled because this pipeline was never needed,” said attorney Jennifer Danis, who represents the New Jersey Conservation Foundation. The organization owns land that would have been in the path of PennEast. “It was destructive, it would have harmed wetlands and water quality in the state, along with committing New Jersey ratepayers to fossil fuel infrastructure that would last 50 to 80 years when there was a glut of capacity — nobody ever needed it to begin with.”

Danis told NGI’s Shale Daily that the state also played an instrumental role in shutting down the project. She said state officials “went to the mat” fighting against the project because they knew there was “no business case for it.” Other groups such as the Delaware Riverkeeper Network (DRN), Berks Gas Truth, Environment New Jersey and the New Jersey Sierra club partnered to resist PennEast.

“We knew we would get here eventually, it was just a matter of time,” said DRN leader Maya van Rossum.

PennEast now joins a growing list of natural gas infrastructure projects, including the Constitution Pipeline and Northern Access expansion project in the Northeast, that have been canceled or failed to move ahead.

“The cancellation of PennEast confirms the fact that it’s nearly impossible to complete a greenfield pipeline out of Northeast Pennsylvania,” said Ryan Smith, an analyst at East Daley Capital Inc.

PennEast was one of just two greenfield pipeline projects pending in the Appalachian Basin. The Mountain Valley Pipeline has also faced staunch opposition and ongoing delays. Smith told NGI’s Shale Daily that rising gas prices and stronger international demand for liquefied natural gas are likely to boost production in the basin significantly in the years ahead. Without additional pipeline capacity built, the firm expects existing infrastructure and expansion projects to fill quickly.

“This will create severe takeaway constraints out of the region again, and we expect Appalachian basis to weaken substantially.”

The Interstate Natural Gas Association of America (INGAA) noted that roughly three-quarters of New Jersey residents rely on natural gas to heat their homes. The group said sharp spikes in natural gas prices across the Northeast in recent years demonstrate the need for more infrastructure to serve the region.

“The United States has abundant natural resources that can provide affordable energy to every American family, such as the Marcellus Shale, which is the second largest natural gas field in the world,” an INGAA spokesman said.  “However, if we cannot get that gas to where it is needed because of regulatory and legal challenges by those who are content to impose higher energy bills on working families, we are effectively abandoning this strategic American asset.”

The Marcellus Shale Coalition (MSC) added that the developers’ decision to abandon the project would also hurt the regional workforce.

“While it may be a good day for extreme politicians and anti-energy activists, it’s a terrible day for consumers, our regional building trades, and our American energy security,” said MSC President David Callahan.

The 120-mile, 1 Bcf/d system would have moved more gas from the shale fields of Pennsylvania to the rest of the state and New Jersey. Given setbacks, the developers had planned to move ahead with the project in two stages. The first section was slated to come online in Pennsylvania and the second in New Jersey, where about one-third of the system would have been located in Hunterdon and Mercer counties.

“This is a disappointing decision that highlights the need for a more streamlined and reasonable regulatory approach to pipeline development,” said PA Alliance for Energy spokesman Kurt Knaus. “Pennsylvania now will lose its share of what was expected to be $1.2 billion in investments.”

It’s unclear exactly how much PennEast had invested in the project, which was projected to cost about $1 billion. The system was a joint venture of NJR Pipeline Co., SJI Midstream, Southern Company Gas, Enbridge Inc. and UGI Energy Services.

“I think this should send the signal that the days of trying to gin up need through these affiliate-supported pipelines ought to be over,” said Danis, who is also a senior fellow at Columbia Law School’s Sabin Center for Climate Change Law. She noted PennEast’s decision also came after a federal appeals court earlier this year vacated Spire STL Pipeline LLC’s certificate finding that federal regulators failed to properly examine market need for the project.

“Nobody wants to pay for infrastructure for 50 years when we know to meet our climate goals they don’t have that kind of a lifetime,” Danis said.